Railroad tracks have always had a sense of place for me. Although they are merely conduits, arteries, circuitry used to move something along and through and away to the next destination, they are compelling objects in their own right, and especially so when you come upon them on foot – surprising discoveries in unexpected places. I must not be alone in this feeling that tracks lend a placeness to wherever they are, because so many people, even in places where the tracks have been removed, gravitate there to walk, ride their bicycles and feel good being outside. Asphalt possesses little of the  poetry of tracks, but the spatial construct, the feel of it, is extant and recognizable. 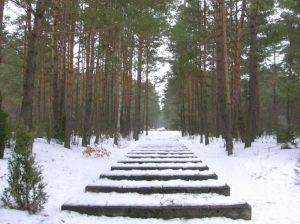 For a hundred years or more, railroad companies laid their tracks alongside waterways, following the natural connectors of land to create settlements, commerce and expansion. In fact, many rail lines had the best views along the riparian edges of rivers and coastlines, as well as some dizzying, breathtaking, winding switchback climbs up to seemingly impenetrable mountains, which they then penetrated and came out the other side. The rail paths’ existence alone is a marvel to ponder, along with the human power that built them, but one must also consider the isolation and  loneliness that surely accompanied the laying of track in places that only dreams – of manifest destiny, of wealth, of monumental achievement, of nature-taming – could imagine.

Over the years, since that initial scarring, nature has reasserted itself and, in the most wonderful of spots, it and the hand of man have achieved parity. There is a combined effect that happens between train and nature, forming a kind of tunnel or arbor out of the feral growth that occurs around the brutal tracks. It grows in a kind of carved-out topiary with generational memory of the last passing train – the plant life accommodating or dying, fashioning an elongated green arcade, a verdant chute with lovely dappled light. This half-human/half-nature creation is a horizontal rabbit hole, beckoning us Alices to enter it. Such is the effect of the encasing foliage structure above and around the tracks, which either go straight ahead for miles, fading into perspectival distance, or turn and disappear, suddenly, like animal tracks: both scenarios lend their own mystery. It is a teasing of the mind’s eye, a stimulation of the imagination as to where it goes and how far and where it leads, conceptual issues that add to the magic of the already magical enclosed space – all at once, and in one, a sense of destiny and placeness.

My great grandmother’s house sat on the floodplain between the river and the tracks, with not much ground separating the fixed from the moving. The tracks were an upper boundary, running atop a banked retaining wall along the property, a bizarre inside-out moat that had to be crossed via a gravel road for access to the world. There was an  interesting irony, one I didn’t grasp at the time, of being settled, stationary between two modes of transportation. I was drawn to the tracks, as if by a magnet, not only for their mysterious presence but also by a metaphor I didn’t yet understand: standing at a crossroads, looking both ways to where the tracks had been and where they were headed, disappearing into uncertainty. 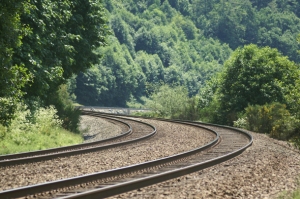 All these thoughts arise when I look at railroad tracks: a combination of memory, imagined journey, markers, pointers, industrial achievement, conquest and the reassertion of nature’s mandate – resulting in a powerful sense of belonging.

One more thought, full of memory: For me, as a child visiting Coney Island in Cincinnati, there was a ride that generated this same sensation: the Kiddie Kars. Comprised of small-gauge tracks, and on them miniature hand-cranked railcars (think of a full-sized handcar or pump trolley, but designed for one – a tiny one), it was somebody’s idea of utilizing, for fun and profit, the dead space behind and under the big wooden roller coaster. It was a child-powered adventure around and beneath the big ride but through the same sort of back-alley thickets, wrong-side-of-the-tracks magical mystery tour that real trains traveled. And it was wonderful in conveying a sense of unexplored lands and self-sufficiency, freedom and even danger – the remote but ever-present possibility of something falling from the heights of the roller coaster – exactly the sort of things that kids love and that liability laws and parental overprotection have made extinct these days. Back then, it was all about kids relying on their little arms to propel them out of the overgrowth and the otherness at civilization’s edge, the abandoned-seeming and forgotten rear of the park, and, at their own pace, returning to their waiting parents. It was always the most fun when there was no one behind you to make you go faster than you wished to go. With this ride, being last in line was best.