I grew up in a house that was placed in a unique setting: built upon a large hill but nestled up against another smaller hill on a kind of protected plateau, the whole creating an acoustical framework. The hill behind caused an echo effect and the hill below acted as a funnel, sending sound up to us. We were situated in the middle, like a receiving tower or a dish antenna in the Very Large Array. About a half mile down the hill in a valley was a major expressway, constructed in the watershed of a creek, whose twisty path it followed through the city. Beyond that, a few hundred feet away, were the vast train yards of a once major hub of rail transportation. Both of these travel paths, road and rail, were sources of sounds, sounds that I grew up with – naturally believing that those were the norm everywhere. From the expressway, there was the constant background rush (of course, reduced by the distance from it), a low, persistent, almost ocean sound. And, too, the occasional downshifting of truck engines as they slowed for the road curves that mirrored the creek bed, a baritone drone that changed pitch with gear ratio. All of this was more apparent at night; and as the sound travelled up the hill like surface waves and got caught against the hill behind us, it would bounce and settle into our natural amphitheater – an early version of surround sound. The acoustics were quite good. Then the trains would join in, with their rumbling bass temporarily drowning out the expressway and their soft blasts of diesel air horns, which can be as soothing at night as a chorus of bullfrogs can be. There were more immediate sounds closer by, but not so much at night, thereby magnifying the ones traveling up the hill.

I could never have predicted that I would eventually live in my own house and experience, almost exactly note for note, the same sounds. Thirty years later, in a different city in a different state, a different neighborhood that is more hard-surfaced and appeared to be nothing like the place I grew up in – there I was lying in bed, maybe the first month we were living in the house, and I heard it. I heard it all again.

The house we live in is situated at the top of a hill with a large building behind it that acts just as the small hill in back did in my childhood home. About a half mile down the hill, in a valley and across a river is a major expressway that follows the river’s curves. Between the road and the river are train tracks – not a train yard, but a regularly used set. The persistent sound of the expressway flows up the hill and bounces off the building behind us, the trucks downshift and rumble as they negotiate the curvy road. The trains’ deep roar drowns out the other sounds, and their soft blasts of diesel air horns have that same comforting tone. It is uncanny, really, how similar the distance to the source of these sounds is – the one in Cincinnati, the other in Philadelphia – and how nearly identical the sounds that are generated, then and now. I can close my eyes and listen and be back in my original room. Or, I can be in the room of my own choosing and feel just as whole and connected to here as I did to there. 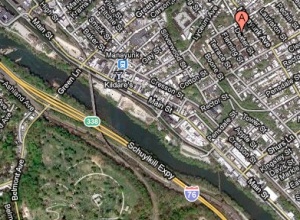 It is impossible to imagine how I was able to find the perfect spot to recreate the background music of my past. It wasn’t the thing I was actively seeking – it just happened. But it is magical. It is a piece of my past made present. The soundtrack of my life. I am lucky in this way because it is serendipity that this is the way it is. Sometimes being in a new place, the sounds around you can be bothersome, frightening even. What are the chances that I would have the same sounds?

Sound can create placeness just as objects or spaces can. It is said that smell is the most memory-driven of the senses, but I believe, just as powerful, is sound – familiar and eternal and place-making.