He Was a Friend of Mine

The Grim Reaper works in mysterious ways, claiming some too soon and others a bit late. But his aim is true, regardless of the time or willingness of the spirit.

For Warren, it was too soon. I met Warren in 1986 when he and Janet bought the building next door at about the same time that we bought ours. There were some interesting connections that we shared from the get-go: people we already knew, a desire for unique live/work space, art and art-making. And, too, physically, our buildings shared connections: of the land’s history, of being held jointly by several generations of owner-occupiers and their entrepreneurial endeavors, and, of Warren and Janet’s structure having been erected on what was once our building’s orchard way back in the late 1800s. But there was also a connection of friendship and of finding our way simultaneously in our shared new neighborhood.

As working artists, Warren and I spent time together, visiting each other’s studios, talking about projects we were working on. We would take strolls through the neighborhood and find other artists who also were setting up camp – we had a kind of “art-dar” about locating them. In many ways our association was like a continuation of art school: studio visits, discussions, salons which Warren and Janet would throw. And, ultimately, Warren and I had some shows together, first in his large loft space and then in both houses, a distribution of works at both sites in which the attendees would flow from one building then out and into the other, making our houses connected again into a complex of art galleries. It was a great time. Later, Warren’s interests moved to temporary installations and performances. I remember heavy canvas boots with about forty long screws emerging from the soles, salvia plants and several dozen watering cans. Or mass-produced bunnies placed in nooks above doorways, crouched in out-of-context sites throughout the city. Warren’s work became a kind of guerrilla artfare but in such a gentle way.

When Dana was born, we were the ones who brought special pillows and a packed overnight bag to the hospital for the duration of their stay. During the sweltering summer, we bought a paddling pool to cool off in and our trio from next door would come over and join in. We have video tape of Dana kicking and bobbing in the water, just a few months old, looking like a small cork with limbs. When any of their or our relatives, largely from the Midwest, would visit, we would meet theirs and they ours. In many ways we felt like family. While Dana was small, Warren did a good deal of childcare and, once again, I would accompany the two of them as we ferreted out treasures in thrift stores or flea markets. Warren was an excellent dad, including his little girl in his life and being very much aware of her needs. And I loved the little color-packed ensembles he would dress her in – I assumed he dressed her because there was something very Warren in the patterns and the palette. When Dana was old enough to appreciate it, we all built a snow-woman together after a big snowfall. And when our steep hills became bobsled tracks, Warren would be among the first on the slopes with his super sled. I remember vividly the first time he took Dana down the hill and her resulting screams of utter delight together with his equal delight. Warren had that wonderful combination of mischievous childlike wonder, gentleness of spirit and a practical Midwestern groundedness.

Fast forward twenty-five years and a lot of change has occurred – Dana is a grown woman, Warren and Janet moved forward in separate directions, now a new tenant is inhabiting their house next door and Warren is no longer with us. We were invited to a party by the new neighbor, just having learned of the terrible news of Warren’s death, and we sat dumbfounded and sad, encircled by Warren in that huge space. I mean surrounded. It is so apparent that in his absence he is so present. He is everywhere in that place, from the design/build work that he did to make a warehouse a home, to the collection of farm implements that decorate the walls, including the array of fire-engine red and brass watering cans, to the hand-painted furniture that he covered with his own special calligraphy and color-palette, to the folding screens that he fashioned for the function of capturing contained space in a vast room – and they are beautiful free-standing works that bring art into the center of the room, plus the large number of ink and wash drawings, some with text, that are mounted on walls and which, together with the screens and the furniture, bring a sense of artwork from the perimeter walls, and weaves it through the space as all of it envelops you. Warren is there, still. It is a loving tribute to him that Janet has left it untouched. We went downstairs to his former studio and felt his presence there, too, with all his tools and boxes of materials. It was an empty feeling of sadness but, yet, there was a sense of placeness – of the artist manipulating his environment and leaving it forever changed.

I think one memory I will hold in my mind about Warren was this one: It was another of those cold snow-covered wintry days, darkness arriving too early and a kind of bleakness in the air. I looked out my window at the long night and there, along our shoveled sidewalk path was a landing strip of lights, small white paper bags nestled into the snow with a single lit candle in each. The effect was like flickering candles set adrift on a stream. The white snow holes glowing and illuminating the landscape. It was magical. It was Warren. 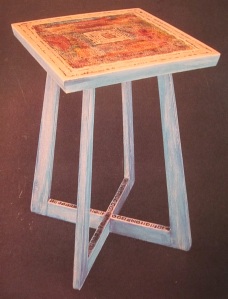