Realm of the Coin

Under normal circumstances, standing on a metal grate and looking down into the hard and shadowy depths below would not immediately, or even at all, bring to mind a burbling, spouting fountain in the center court of a suburban mall. But there the mental link made itself plain, in an odd placeness puzzlement.

Let’s backtrack, shall we? A strange quirk of human behavior, one that has been practiced from time immemorial, is the tossing of a coin into a well in order to make a desire come true. Wishing wells are part of many cultures; they show up in everything from ancient fables to convenient romantic or comic devices in motion pictures. Whether the idea behind the coin-tossing action comes from an old superstition in which the “donation” of some money to a spirit dwelling below ground will propitiate that god, who will reciprocate by granting a come-true wish – whether that’s the root of it, it is a harmless relic that has a sweet, innocent, feel-good sort of aura about it. There’s usually the hope of love attached to it – and also, likely, the love of some extra cash experienced by the well owner, who has advertised the special nature of his hole in the ground.

This magical placeness, all wrapped up in our primal pagan urgings, makes some sense. There are places that feel spiritual; there are places that strike us as supernatural. And, being in one of those places, it has become tradition to sacrifice something in order to get a higher power’s attention and interest. Better a coin than a goat, we say. (And isn’t the church collection plate really just a wishing well of sorts?)

But, something strange has taken place over the past few decades, by our observation. Apparently, a wishing well is no longer required for the purchase of dreams – instead, any body of still water will do. We have been to ponds, to carved basins in sculpture parks, to that aforementioned ersatz-Trevi mall fountain – to lots of shallow repositories of water, and there, glittering, unexpectedly, below the clear surface, were coins. Why would anyone, we wondered, expect a wish to be fulfilled or good luck to be bestowed, by flipping a coin into a mall water feature? Is it a belief that the money will go to charity? Is it a belief that any body of water has magic powers, even one just across from Macy’s and the Cinnabon? Is it not the god of the deep that is responsible for granting the request but, rather, water itself? And is there a true feeling of placeness, of specialness, of communion with unseen forces, in places like this? Frankly, having seen so many coins tossed in so many unlikely patches of water, it surprises us that people haven’t started pitching pennies into public toilets. 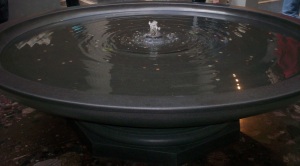 And, then, here we are, in the Smithsonian’s National Museum of American History, in Washington, D.C., in a room dedicated to all things electrical – from small appliances to giant generators – and, dominating the room, is a gigantically tall pillar: a huge piston, towering many feet above any head. As one approaches it, one becomes aware of a metal grate in the concrete floor just in front of this massive, gleaming monolith of American ingenuity. Looking down, through the grate openings, one can see that the towering piston is only the tip of the iceberg – as much or more of it extends below, into a small sub-basement. It is impressive. But then the eye is caught by something else: Scattered over that sub-flooring, a story or two below where we are standing, are little glistening dots, shining in the light. And it becomes suddenly clear: People have been throwing coins through the grate to the chamber below … for what? Does this place, this hole in the ground in front of a science exhibit, resonate with them as a magical locale where wishes will come true? In what way, other than depth, is this analogous to a wishing-well experience? When they were standing on this grate, in front of this big cylindrical hunk of metal, what was it that made them reach into their pockets for a coin? Are things so bad in this country at the moment that we will toss a hope-linked sacrifice into just about anything that will contain it, just on the off-chance that it will work? From where, exactly, does such an act derive, and where and what is the sense of placeness that provokes it?