As long as I can remember, there have been places of gathering. Not the institutionalized ones where we humans are expected to group, but the ones that draw together like-minded people who want to spend time with each other in a favorable environment, much like the selective pooling of dry leaves, a smattering of the many millions, blown into a huddled niche. Is it for company or affirmation or, perhaps, some magnetic pull of colliding worlds? Surely it is a strong impulse to find people that you find comfortable and comforting. And, too, a place that enhances that connection.

Having never been a joiner after two disappointing experiences with, first, a scouting troop and, second, a high-school fraternal organization, I aimed to seek out social interaction in less formalized ways. Happenstance was my guide. Finding the right place would provide the right companions.

There was a new coffeehouse that opened near the university. On Friday nights they would tune to an FM radio station that was testing a three-hour slot to play “alternative music.” Wearing my fringed boots and best paisley, I sat and sipped tea with others, listening to and discussing the music and other pop topics that a young twenty-year-old like me liked to think about. There was a lot of patchouli in the air, along with steaming cups of fragrant herbal brews, and a strong sense of independence. We were finding ourselves and our way within our very own subculture. The tables were mismatched and worn and familiarly comfortable. There was a large painted mural of mountains and streams, an idyllic place found in the crevasse somewhere between childhood and the future, and the atmosphere was thick with youthful energy. The whole reeked of placeness. It was us against whatever was outside that entry door.

I think that it is important that such a place be a neutral place. There have been homes known for being gathering places – parents’, grandparents’, friends’, a sibling’s first apartment, my first apartment – but as much as they can be enjoyable, it is that shared experience where everyone is on equal footing and everyone is there by choice, not by default, that gives it extra meaning.

This early experience of the coffeehouse has been repeated in the past few years. The new place is a restaurant that has a group of regulars, a cast of characters. It sits in a town that looks uncannily similar to that mural on that patchouli-soaked wall, only it is three-dimensional and real. There is music playing inside but it is emanating from iTunes on a laptop. It could be some of the same songs. The walls are cluttered with “salon style” hangings of artwork that likely could have been produced at that time when the FM dial was being reborn. It is warm and cozy, and the smells from the kitchen are engaging. It is another form of subculture, this place of homespun vegan fare that is tasty and guilt-free. There are heavy political discussions taking place at the many mismatched, dark-wood tables in the pale-green wainscoted room. A birthday cupcake arrives with a song and the filled-to-capacity room sings along. It is an intimate space wearing a big welcoming grin, and the place is partly real and partly unreal in terms of the world. The building’s bay windowed facade, however, looks out to the world, watching it and beckoning it to enter. 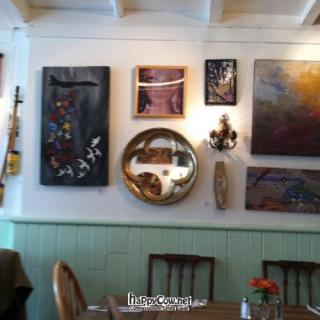