Our one big splurge, no oftener than once a month, is buying a Bake at Home Pizza. For those who are not familiar with the concept, this is a fresh pizza that you take home and bake on your own schedule – sort of like frozen but made on-site and customized for you. We can walk to pick it up, and it is a steep climb back up the hill while carrying the wind-snagging large square box, but it has become a 27-year tradition. About a year ago, our favorite whole-wheat crust changed – that was the first sign. 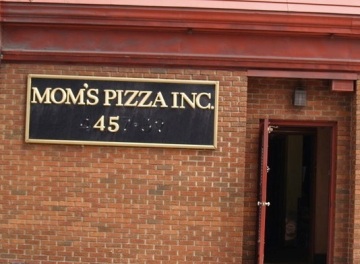 The owner had become a friend over the years as we chatted over the counter while she assembled our pizza. After so many pizzas, we didn’t have to order, she just automatically made what she knew we wanted. And we were only one of her longtime customers who had the same relationship and familiarity. We also knew her husband, who helped out in the shop, and her nephew, who used to work the counter on Saturdays. Even when we weren’t in the market for a pizza, we would stop in at the shop to say hi and catch up on gossip. That is the beauty and the placeness of local proprietors: getting to know them and having a long-term connection. It is just the sort of thing that is disappearing in our big-box world where, rather, it should be something to cherish.

When the crust first changed, it was explained to us that the company who started the business and made the crusts by hand directly across the street had recently sold its building and that the crusts were now coming from someplace else. Our sense was that production was being outsourced and that the dough was suffering. There was a qualitative drop and the pizza-shop owner was forced into a corner: should she sell pizza inferior to what she had built her business upon, or bail out from the original franchise and find her own dough, so to speak? She chose quality over economy and found a better substitute for the crust, severing what was a three-decades-long connection with her supplier. Besides flying solo, she had to change the trademarked business name on the storefront and stop using the name-imprinted boxes for the pies: first achieved by means of a magic marker, then a sticker, and, finally, new generic pizza boxes. Everything was changing. The old boxes had the baking instructions printed on them, but not the new makeshift ones. The store was getting overwhelmed with customer calls about how to bake the pizzas – since everyone relied on the box top.

Our frequency of pizza purchases had slowed, and it had been a couple of months since our last visit. There were cosmetic changes happening inside the store. An eat-in sit-down area was now carved out of the small space that had been entirely counter – odd for a business called Bake at Home. New tile on the floor, a glass partition on half of the counter, a different signboard on the wall and a new man busy behind the counter. He, it turns out, isn’t related. He is the new owner.

The business has sold, I am told by a young employee who has been kept on. No wonder all the changes. The smiling new owner tells me that he is expanding the business to be a pizza parlor – meaning on-site, bake-on-premises – and he is adding steaks and subs, garlic bread, sandwiches, etc. He is congenial and has a thick accent. I am sure he is eager to succeed. It seems to me that all the things he has mentioned are popular, although they are ubiquitous. In this town, pizza parlors and sub shops are found two or three to a block. It was the unique nature of the original business – of creating a niche instead of just filling a crowded one – that made it sing. And, too, the person whom we identified with the very kind of business that encouraged conversation and company alongside really good pizza was now gone with the winds of change. I got a feeling that this new approach will be standardized, more of a move-’em-in-move-’em-out kind of establishment, and therefore more anonymous and fast-food-like.

To me it is a void already. I feel the loss of a friend and a familiar establishment, a way of doing something a little bit differently, a wonderful pizza to enjoy, plus the ritual of it. An absence of arslocii is a game-changer; we need more placeness, not less.