The Where They Were 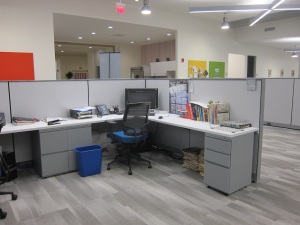 You work and work, and then one day your job is done, or you are done with it, or they are done with you, and – whether it be through resignation, retirement, reorganization or death, physical or psychical ­– you are out that door, a lump of he’s-a-jolly-good-fellow sheet cake in your gut, and gone baby gone.

Except … there are some people – whether because they were beloved or admired or projected a force of personality that transcended the quotidian quiescence of most workplaces – who leave behind their “ghosts”: They, or their tenets, or their echoes, remain in the room. And where they did their work seems to have achieved a kind of placeness that borders on the haunted. That desk, that cubicle, that office – these seem to be theirs and them, and it’s difficult to imagine that they will not be occupying them any longer, and so people leave them alone, stay away, don’t touch a thing and cast glances there every now and then as if to spy them, in their past poses, and thus to reacquire the comfort of their presence, and to return that tilted world to a balance. It is not quite a cargo cult, and not quite a wish, or a prayer, but a feeling or a need.

We humans have an innate propensity toward sanctifying the places where the bigger-than-life have labored, and imprisoning them as if in amber. Douglas MacArthur’s office, Cesar Chavez’s office, Churchill’s underground bunker, others of personages either widely famous or locally known – we freeze those rooms at a certain point in the past, a date or year or period or heightened significance or benevolence or creativity, sometimes in situ, sometimes moved and reassembled in a museum setting.

It is not that the famous or near-famous are there, again, or ever will be, or can be – it is that they were, and that they touched the things there and walked among them , and that the work we know them for was done there. It is like a contact magic. As posed or arid or clinical or hokey or even phony as these places are – somewhat like the real-estate equivalent of taxidermy – they have, in a secular, past-revering and -distorting, celebrity-obsessed society, the power and the function of shrines.

The only such place that to me ever actually felt holy, with a natural and overpowering placeness that was both artless and art-filled, was Jackson Pollack’s studio, on Long Island. Wearing little booties to help preserve the wondrous splatters that explode all over the studio floor, the visitor feels, strongly, palpably, that he has arrived while Pollack has stepped out for a few minutes – paint cans sit open, brushes still upright in them; the only thing missing is a cigarette curling smoke, long ash dangling – and that if he waits long enough the artist will walk through the door and wonder what the hell this interloper is doing there.

But, closer to home: Within 10 days recently, the place where I work saw the departures – planned, if not joyous – of two office leaders, each with 30-plus years in the job and a staff that not only relied on them but looked up to them. We had our parties, said our “auf Wiedersehens,” looked on with envy, pity and fear ….

Now there is the matter of their desks. Theirs are in good locations, one in a prime spot. We have people who would be better served by moving from where they are now to these now-vacant stations. There is no reason for them not to move.

But nobody can bring themselves to do it.

Everybody is steering clear of these two workstations. One of them was cleared, cleaned and neutralized by its recently departed tenant; there is nothing there to indicate that this person ever spent time there. It is ready for anyone to take over. But it sits empty – it is Kevin’s place, still. And the other desk? Well, it’s nearly the way it was when Vince sat there; he walked away without removing much – books, papers, even his favorite green drinking cup are still there. Drawers are still full. No one can even imagine removing the artifacts – it would be blasphemy, desecration. It’s Vince’s desk, and likely to be for a while. And, hey, the way it looks – maybe he’ll be back. You know?

When is it time to remove the bones? Is there a respectable period – of mourning? – after which these places cease to exude their placeness and return to simply desk and chair? What is the shelf life of reverence? When does “too soon” become “OK, now” – like finally taking the clothes of deceased loved ones out of the closet and packing them up for Goodwill? Will it take an ignorant, inadvertent newcomer to simply plop down in the spot, and that will be that?

And what is it in us that believes in ghosts and “haunted” spots, that lets the specters of friends and colleagues past rule sensible acts – that imbues a place were we knew someone to be with the continuing characteristics of that person and the emotion or respect that we felt for them? 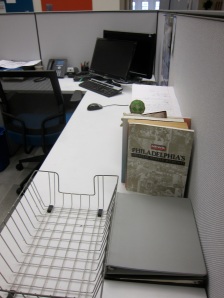