In a culture where most things are expanding (including us), quantity over quality has become the benchmark. Supersized meals, giant portions of nutritionless food, are proliferating everywhere, not just in the burger joints. And while televisions have grown in diagonal measurement, sofas and chairs that hold their viewers have increased in every dimension, especially in bulk. Houses are larger, take up more land area and hold fewer people; cars also have expanded their outer boundaries, yet diminished their interior space – a mathematical improbability. In America, bigger is always better, right? Beds have, in my lifetime, gone from single to double to queen to king. Bathrooms, too, have become larger and have gone from one to, sometimes, five in a household. 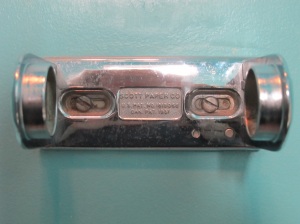 But there is one thing, a more important thing, that has noticeably shrunk: toilet paper. How do I know this? It is not that I measure the rolls. I don’t need to, because I have the tell: very old, institutional toilet paper dispensers made by the Scott Paper Company. The original patent for the Rolled Paper Holder was issued in 1931, an Art Deco-designed promotional product that most likely functioned the same way that the Gillette Company razor did: give away the razor, make a fortune on the blades.

Fifty years later, I found them in thrift shops and attached them to the walls of my bathrooms because I liked them for their institutional simplicity and sturdiness. But the gimmicky best part was their operation. There was no roller, per se; but in its place, two stationary arms with short, round receptacles to hold the roll. 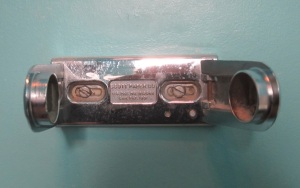 A small button behind the paper roll, when depressed, released the one hinged side to allow removal and replacement of the roll, and then, with a click, locked it back into place. Clever, almost Machine Age. I remember that, well into the 1990s, there were variations of how well the toilet paper rolls fit on the device, depending on brands. (Sorry, Scott, but we didn’t stay loyal all the time.) Mostly, the rolls would fit perfectly within the 4.5” space allotted; however, very occasionally, there were rolls that were ever so slightly wider, probably by microns. Those rolls would shred at the edges, rubbing the holder-arms as the paper would unfurl, dropping papery dustings like snowflakes from both sides of the holder. Toilet paper as visual entertainment.

That diversion stopped some time ago, and now it is an impossibility since most current paper rolls, when mounted on the device, barely stay on the holder. The width of the roll and its paper have diminished so much that it is possible to change rolls without pushing the release button to do so. There must be a good quarter- to half-inch gap between roll and roll holder. This shrinkage happened gradually, of course. And at first it was imperceptible; just the telltale snow-dusting no longer occurring. But the gap soon became apparent, and now it is almost laughable how small and child-like the rolls of paper look in comparison to the hefty, industrial-sized Scott Paper holder. The undersized rolls wobble and tumble from their perch, ill-fitted as they are. 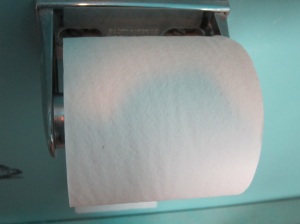 Oh, I understand the significance and approve of fewer forests being destroyed for the sake of us wiping our asses. And it is not about size mattering, because, as stated above, au contraire. But here is an instance where quantity and quality (thickness in every measurement) have diminished simultaneously, as it has become familiar to expect just the quantity to expand, as price tends to increase – I have discovered a new theorem in something as ubiquitous as toilet paper. 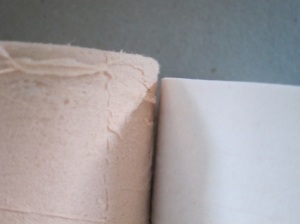 And, too, whenever you put something old and decently made up against something new, you are bound to experience disappointment. Which I did, since I have a very old roll of paper in one of those goofy doll-covers situated “decoratively” on the toilet tank, for guests only. Just so you know, I inherited it. Check it out for yourself. 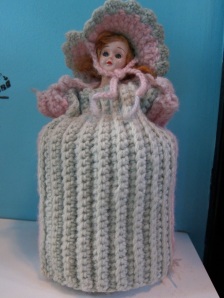 There used to be a sense of pride about the product a company attached its name to. But, of course, now it is not the product that builds the name, it is the name that builds name-recognition; the product is inconsequential. So here I sit (don’t ask where) fixated on the handsome, built-to-last toilet paper dispenser that can no longer serve its purpose because of shrunken paper rolls. It doesn’t seem right that this cast metal, patented design – and its delightfully inventive “on-off” switch – should be rendered disposable because of diminishing returns on rolls of tissue. There once was a placeness to the pairing of the paper and its support, made for each other, so to speak, but now, sadly, drifting apart in a shrinking economy. 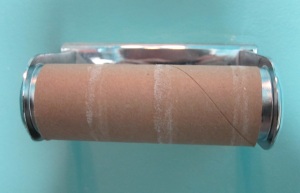