Air conditioning has never held a place in my life. The only mechanical cooling devices that I have used are electric fans. My father was a mathematician and electrical engineer, and he therefore understood the physics and practicality of products with cords. He would place fans in strategic locations around the house: one was attached across the opening of the attic’s hatch in the ceiling – to draw the hot air up and out through the roof vents; another would be placed in a doorway on the floor to push the warm air up above our heads; others would be set in windows, either blowing in or out, depending on which side of the house. There was an intelligent logic about air masses and air flow that he demonstrated by these placed fans. He never aimed a fan to blow directly on him, though; that might have been more of a superstition than an educated decision.

Aside from the rather extensive collection of fan brands and types – oscillating, box, table, window and hassock, with their big electric motor company logos – I became enamored of their look and style as much as their function. By osmosis, I learned about moving air in a meaningful way. As a pre-teen, whenever I would be blue or upset I would take walks; on one such walk I found a fan in a weedy empty lot. I brought it home and Dad helped me to rewire it. It was a prize. When, as a young adult, an older relative was downsizing and I spied a huge window fan in the “out” pile, I grabbed it like it was the most valued object in the house. Well, to me it was. Many more old electric fans have come to me at yard sales, flea markets and from other family members. At last count, I have four large window fans, five floor fans, five table fans and two fans on stands. They are much loved and oiled on a regular basis. You could say I am a fan fan. 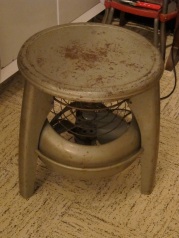 What is it about them? Well, of course, their connection to my father. But they are often round and I like round things; and even if their casing is square they have a round soul or face. The electric whirr of the motors is soothing, and maybe one day someone will discover that it taps into your alpha brain waves in the same way that biofeedback did back in the day. They do actually cool you in the heat, too. I close things up during the hottest part of the day, then I either draw basement air up into the first floor with a window fan; or I pull cooler night air in through the open windows, and by morning you might need a blanket. In my house there is an attic fan, but, as opposed to my father’s scheme, it doesn’t pull hot air from the house; rather, it is solely for evacuating the trapped hot air from the attic. It does have a similar effect of cooling the house, just not as directly.

Anything that has electricity and moves has a life to it. Fans have the added bonus of providing a service, doing something helpful and immediate to cooling our world – without collecting and adding more heat in the process like air conditioning. Buildings shut themselves off, cars are closed up tight with chilled air – chilled air in an unbreathing room belching out hot air for the rest of us. Why aren’t fans good enough anymore? We have made a move on wind power and capturing the energy that it produces. Fans have been using the energy to cool us by evaporation for as long as electricity has been available. 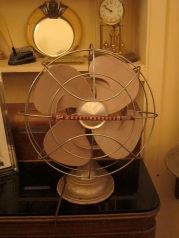 It is sad that the fan – so simple, so effective, so versatile – is in decline in our Air-Conditioner Nation. Take a walk, as I used to, and you’ll see, especially on trash day, fans kicked to the curb, unwanted, dismissed from duty. And, often, they are still good. Within the past few months I have found two in someone’s discard pile, took them home, plugged them in – and they worked like charms. In fact, they are charming, in all senses of the word. In your window, on a table, on the floor, they hum away, pushing air around in the kindest of ways, letting you look through their grill-work to see the blur of their busy blades and views of what’s behind and beyond. An air conditioner merely sits there, a big, personality-less block, like the Borg ship, separating you from the world at large. A fan lends an air of placeness to even the grimmest of rooms; an air conditioner removes placeness, the way it removes heated air, from even the nicest of surroundings. A fan is like a pet; an air conditioner is like a security guard. 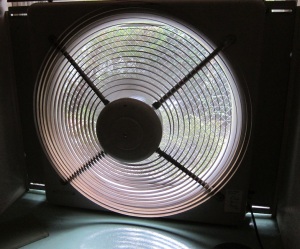