Where do trees go when they die? Some just stay in place and become their own ghostly markers. Others topple over, sometimes taking along near-neighbor trees or human-made objects or structures with them. They live their lives and end their lives in the same spot, unable to move away from danger.

Two weeks ago, during the surprise of Sandy (now referred to as Superstorm), thousands of trees were lost on the East Coast. Thousands. The kinds of numbers that are all-too-familiarly reported in human casualties during wartime or plagues. Of course, trees have had their plagues, too. But in proportion to the frequent tree damage that occurs in various disease- and storm-related events throughout the seasons, this was huge in scope.

In New York City alone, roughly 10,000 trees succumbed and, also, multiple thousands were felled on Long Island. These shocking numbers were reported by state and city parks administrators. And in New Jersey, utility companies logged more than 113,000 irreparably damaged trees, many of which up until this particular storm had survived a hundred years or more of natural assaults.

I am walking through a trail on the eastern edge of the Catskills, and, let’s remember, it is two weeks after the record-shattering hurricane. It is usually a silent place, entirely wooded by white pines, oaks, birches, hemlock. There is an outdoor cathedral quality about the landscape, with the towering arboreal columns that allow sunlight to ricochet off the trunks, or to glint through the empty spaces as it would through clerestory windows above a cavernous interior space. Filtered light sprinkles through the veil of pine needles above – what is left of them, that is.

In the distance I hear the constant buzz of chain saws. I have been hearing that sound every day since the storm. Sometimes it is loud and close, now it is low and soft. Although it is somewhat like the riling sound that a fly or mosquito makes, an annoying, persistent and alarming noise. The ever-present buzz echoes off the mountains and hovers like fog over the valleys. It could be miles away but its droning is solidly felt. All around, it is the familiar sound of sadness and loss. 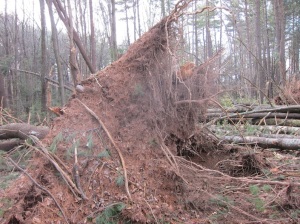 In this special place, a heavily wooded parcel of just under 80-acres, this municipally owned land protected by a conservation easement for the town around it, is shocking evidence of the devastation. It feels like wholesale slaughter, a massacre. Trees lying down, feet in the air. Trees splintered off twenty feet above the ground. Trees piled on top of trees, much like Pick-Up Sticks if the game were played with thousand-pound sticks. Trees that now resemble an exploded view of a tree. Many of the victims have now been cut away for the trail by those same persistent chainsaw flies. It is a heart-wrenching sight, both terrifying and mind-boggling.

Everything seems topsy turvy. Trees should not lie horizontally on the ground. Or be split and cut with their innards exposed – their dignity and life removed. Yes, some of the lucky ones still stand, the survivors who look on helplessly at their fallen fellow creatures. Trees are the very thing we need most in this climate-changed world, yet here I am, and you are, standing in a tree graveyard caused by our own selfish interests, unable to comprehend how, in the scheme of things, they are more necessary to the world’s well-being than we are. Look what we have wrought. 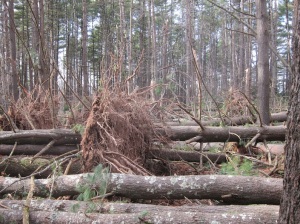 Prelude to a Storm

For two days before the arrival of the hurricane called Sandy, it was unusually gray and overcast. Dense cloud cover, thick heaps (cumulus) resembling dryer lint, so much so that they made us land dwellers feel like the central portion of a sandwich. There was pressure in those log-jammed clouds, enough to have a physical presence rather than the usual visual one. Sometimes you could smell the salt in the air – and the ocean is 50 miles east of where I am standing. I couldn’t help but think of Ray Bradbury’s  “Something Wicked This Way Comes,” and also “The Wizard of Oz.”

Extreme weather can be exhilarating, in an adrenaline-pumping way. And it can be deadly. I remember seeing the tornado that destroyed Xenia, Ohio, in 1974, from a safe distance of about 50 miles. It crossed the horizon and looked to be about three inches high from my vantage point – but it was awesome at that size, swirling like a disturbed and desperate hornets‘ nest.

In June, 2010, I was driving across Ohio and through lower Michigan and witnessed several tornadoes crossing my path – eight were confirmed in the area. From my perspective, in a car, the sky went black in a diagonal line and I was pelted with hail. Pulling off the interstate was the only option. And there were moments, sitting in the flimsy metal car, when I saw distant trees almost double over. I can’t help but wonder about the other fellow creatures caught in the storm, the ones without weather channels.

The day hurricane Sandy was supposed to put its evil eye on our region, I felt an  urgency to rake leaves that had already fallen, before the rainfall. The wind was getting stronger, and there were pauses I was forced to take just to wait for the swirling to subside. I looked over, during one of these pauses, at my front porch and there was a squirrel lying flat on its stomach, legs out like a flying squirrel. His eyes were open and seemed to be watching me. Since my tendency is to speak to all animals, I explained that I wouldn’t bother him, I would not be cleaning off the porch just yet, and that he could rest there as long as he needed. I went on with my work.

About an hour or so later, after having worked my way around the other side of the corner, I revisited the porch. The squirrel had not moved. I spoke again, “Are you okay?” It wasn’t that I expected a reply, I just thought that, given normal circumstances, squirrels do not sit still and they do not stick around to listen to what you have to say. Oh, dear. I went into the house to seek out another opinion. My partner looked at the squirrel, unmoving, and noticed that he was not breathing.

A squirrel died on my porch that day, right before the hurricane hit. He was plump, rotund really, perfectly healthy looking, an unharmed animal who either fell out of one of my trees – but wait, he wouldn’t have fallen flat on his belly in a posture like I have seen squirrels assume while resting – or perhaps, he wasn’t feeling well and had a heart attack right there. Or, maybe, the impending storm caused untold stress that sent him over the edge. I felt incredibly sad. And I started to think about how you never see dead squirrels anywhere except on roadways. It was so puzzling that I looked it up on the Internet – why one never sees dead squirrels anywhere. Apparently, the reason is that they are eaten fairly quickly by other animals who find them before we do.

In addition to my sadness, I felt somehow honored that he chose my porch as his final resting place. Let me explain. When I moved into this hard-surfaced city neighborhood, I don’t recall that there were any squirrels within sight. I cut away concrete and planted street trees and, one day, the squirrels started to appear. Looking out our second floor window, there is a lovely horizontal limb that was a favorite spot for many generations of squirrels; bringing nuts or crusts of pizza up onto the branch and snacking, then lying prostrate on the branch for a quick squirrel nap. So I had seen them sleep.

I am happy to have provided habitat for these amazing and amusing creatures, since all around us their habitats are being obliterated. The fact that this chubby (perhaps it was the pizza) squirrel lived his life here, found placeness here and died – the long squirrel nap – here on my porch, makes me glimpse the circle of life and of nature, in the throes of a terrible storm. Maybe he felt safe on my porch, safe enough to die there. I never expected this to happen, and it had never happened before, but I come away feeling that, despite the sadness of this event, and aside from it being a portent of the looming storm, in the universe of the unexplained and the inexplicable, this fellow creature had come home to roost.