It is, after the womb, the first place we know; and, before death, likely the last. It is the single-most persistent place of our lives: we are in it, or on it, or with it for more hours a day, and for more years, than we are in or on or with any other piece of furniture. But it is more than furniture – that word describes a hassock, or a stool. A bed is … a thing and a metaphor, a friend and a foe, mother and lover, the giver of rest and the taker of consciousness, the serpent and the apple – a place where we are us, indeed the most and most often and most vulnerable us that we ever are.

Think of it, bed’s powerful placeness: When we are away from home for any extended period of time, it is not the kitchen table or the garden chaise that we crave to be reunited with but, rather, to “be back in my own bed”; when we are sad or stressed, it is not so much a walk in the woods that we naturally are drawn to as much as we need to “get into bed and pull the covers up over me”; it is the place where we most think of doing some cozy (or, as a child, clandestine) reading, and it is where some of what we read, by Mark Twain and Marcel Proust, James Joyce and Edith Wharton, and others, was written (although, presumably, not together); when we imagine having the most decadent and deserved of breakfasts, in bed is where we have it; when world peace was sought, John and Yoko pursued it in bed.

Bed, it goes without saying, is the place of intimacy – intimacy with everything, in varying ways: with partner(s) (the euphemism for sex is, after all, ‘to go to bed,” no matter if the act took place in a hammock or on the floor), with ideas, with companion animals, with light and dark, with the past and future, with dreams (not daydreams – those are reserved for offices, commutes and unwelcome family events – but those of the most laid-bare conscious self-imagining and unconscious primitive drive) and nightmares and states in between. Bed is the mirror that doesn’t require eyes for reflection. Even our relationship with TV is more intimate when done in bed. In our living rooms we watch shows; in bed we spend time with people – it’s not “The Tonight Show” we watch, it’s Leno; it’s not the “Late Late Show” we stay up for, it’s Craig Ferguson. And not only do intimate relations happen on the bed, but also ours is an intimate relationship with the bed itself; so much so that when one is away, spending the night in a hotel, even if alone, by slipping between the cool sheets of a “strange” bed we experience the exciting, guilty, titillating feeling of committing an act of infidelity. 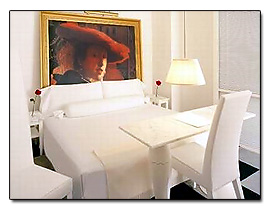 Bed is evidential – a place that says that you exist and provides proof of it: there is your imprint on the bedding and the pillow, there the wadded linens that show the signs of struggle and submission; hair and stains and smells – and, if you check immediately upon rising, the residual warmth of your body left behind, a sensual spectral presence that will not tolerate lengthy analysis and which dissipates quickly into a wrinkled and sour past.

Bed is the place of siren song: it calls, we fight it, we succumb, we are dashed on the rocks of consciousness’ ebb, and we disappear.

And return the next night for more.