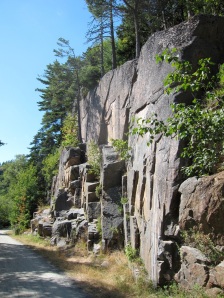 Throughout New England there are plentiful sources of such stone as marble, granite, fieldstone, to name some. Dry-stacked stone walls run along property lines and hug roads as they wind through hills and valleys, creating a unique tailored style which is immediately identifiable – the overall effect is a kind of stitching together of the landscape, despite the intent of separating private property. Even where there are no walls, often there are boulders spaced evenly to delineate borders. Sometimes it is as a preventative for parking on grassy shoulders; other times it is purely decorative. And, often, it is a definer of another sort, a claiming of native stone as a kind of trophy in its relocated environs. In Maine’s Acadia National Park, such large rocks are placed evenly as guard rails along roadways and carriage roads – they are referred to as “Rockefeller’s teeth,” honoring the preservation-minded philanthropist who helped establish the park. Boulders placed in a row on top of soil say something about humans altering nature: they can assemble something spatial and linear but they will never be able to compete with what nature does by blending the rocks and soil into a unified whole – as, say, mountains, or rock outcroppings in the woods. 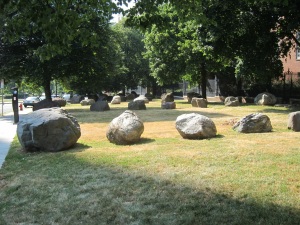 The sculptor Carl Andre constructed Stone Field Sculpture, in Hartford, Connecticut, in 1977, on a triangular wedge of ground next to a church and its Ancient Burying Ground, Hartford’s first public cemetery. This is the artist’s only permanent public work, a land-bound (not sure it could be considered an earthwork) configuration of local boulders placed in a triangle, and diminishing in size as the numbered rows increase. You could say that, given the ubiquitousness of boulders on nearly every piece of land in Connecticut, this piece is unremarkable. Did the artist make the space his own? I would have to say yes, since it is rendered useless for anything but the work. Did he make the site better?

The 36 boulders are set up like bowling pins in eight rows, starting with a single stone (the largest) and lining up in consecutive rows increasing by one stone until the eighth row’s eight stones (the smallest), the space between stones as well as between rows having expanded rhythmically. This piece could be about spatial perspective – after all, the triangular shape is ideal for viewing from one point, and the stones do “recede” in the distance. Or, it could be that the idea has to do with the juxtaposition of native stone in its non-native environment of the urban realm. Possibly, it is just simply a modern marker leading us to the ancient markers of the adjacent graveyard. And it could also be an F.U. to the people of Hartford who have not warmed to it over the past thirty-plus years. And then there is the possibility that this is just the artist’s attempt to play with rocks, like a giant game of marbles or an extra-large billiards rack. Perhaps, if the medium is in fact the message, then it is just a stone field.

Whatever the meaning or motive, there it is. You can walk among the stones; you can also view them while seated on a bench (often occupied by aesthetically puzzled homeless men) positioned  behind the row of eight. The art is elusive, yet clunky. What makes the site better is that there are a few trees growing between some of the boulders, creating an actual interaction between things, a give and take, a bit of naturalism in the larger arena of un-naturalism. 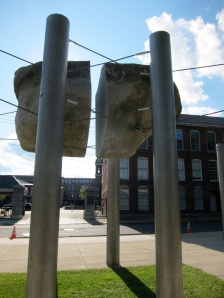 In North Adams, Massachusetts, is a stunning industrial complex once housing the Sprague Electric Company that is now the contemporary museum MASS MoCA, where another artwork made of stone is installed in a plaza facing the main entrance: Primary Separation, by Don Gummer. It is a granite boulder sawed in half and suspended above head level on a grouping of poles and guy wires. At first look, with its organic shape and precision slice, it resembles a potato hogtied for some sort of ritualized harm-doing. It also is reminiscent of Magritte’s Chateau des Pyrenees, except that here there are visible strings. 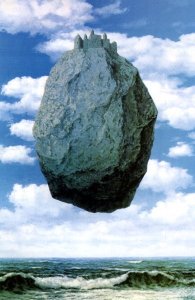 Given its height and suspension, there is, too, the anti-gravity factor, if this is one of those pseudo-scientific art pieces. And there is a notion of meteors. And I can’t escape acknowledging a reference to something caught in a spider’s web, albeit an industrial one. And with that, the contrast of shiny, smooth manmade elements in opposition to the earthmade one(s). But this construct acts as a framing device, framing itself first, then framing the sky as it passes through and across the 11” split opening, framing glimpses of the surrounding Berkshires; maybe even commenting on the cut mountains that encircle it: in that sense it is a war memorial. It is a visibly engineered stonehenge, a modern observatory of the skies and of the museum that funded it.

Despite its obvious weight, the Andre piece, though earthbound, seems disconnected to its site, while the latter, though airborne, seems to intensify itself by bringing in its environment. The one, though grounded, lacking placeness; the other, though skyward, creating it.