As creatures of habit, once we establish ourselves, we find our favorite routes to and from. Some of us never vary our paths; others are more experimental in mixing it up a bit, for variety’s sake. I once worked with a guy who had his routes, by car, so mapped out that he knew exactly how long each one would take: 7 minutes and 32.5 seconds – yes, that precise, and he loved to offer his statistics. Kind of scary.

I do find that once I like a certain path, I will repeat it since it becomes predictable and safe. And I am definitely a shortest-distance chooser, meaning that if there is a choice between the fastest route (higher speed, when it likely takes you out of the way) and a slightly slower one (that connects the start and end points in a straight-ish line), I prefer the latter. Of course, here we are talking about roadways. But whether it is by bicycle or on foot, I will move according to “as the crow flies.”

Another factor that determines my paths is a sense of comfort with the terrain. I just don’t feel safe in multilane highways that slice through undeveloped parcels and give the traveler no sense of context, let alone placeness. It can be like a big, open-range cattle-herding chute, in stampede mode. We have way too many of these behemoth roadways and they disconnect people from places. It is an earthbound version of the “fly-over,” which is how all of America between the east and west coasts is referred to by east- and west-coasters. We have set up thousands of miles of “drive-over or -through” zones. I consider these avoidance paths.

I am a map person – I know that that places me somewhere in the pre-Holocene epoch – and loving the in-hand maps includes the wow factor of the mind-blowing concept that crazy/brave explorers mapped out our world, long before GPS appeared. I not only value what they did but I cherish what they left for us. Maps are wonders of the world – how were they designed, conceived and realized? I have seen some of Lewis and Clark’s first renderings of the Mason-Dixon line. Did they find a path or did they make one? Native Americans followed deer paths and Lewis and Clark followed Native Americans. Now we follow road engineers who don’t believe that the land knows best – they just cut down anything in the way; and it never ends up being a straight line anyway.

I admit I don’t warm to GPS or even to Internet mapping programs because they lack context. There is no where there. Certainly I can follow directions, although they are not always accurate. Instead of beaming in on the micro, a real map will give you the whole picture, and then you can find the specifics. On a device, you have a very narrow window through which to view your options. If you move out, the detail is lost, street names disappear; move in and you are a dot with maybe three lines surrounding you. With a map, you have an entire region and you can maneuver through it in different ways. And you will probably learn things along the way, as opposed to accepting and following one way. Sometimes getting lost with a map in hand can be challenging or exhilarating, since it offers you options for self-correcting. I always feel safer with a map nearby, it is a guidebook to the ground. And as long as we are grounded, it is useful, necessary.

Recently, relying on a web-based mapping program in a rural area – it, sadly, was the only option (well, there’s one point for the electronic version) – but it mapped the wrong address on the wrong road, and had its little pointer pointing to the end of the road for the destination. Strangely, the real road continued on despite the virtual road having ended, but the blinking dot (meaning my car) just kept moving along the empty space of non-existent road on the virtual map. Talk about scary. The road ends/it doesn’t end and the virtual car has found the other side of the looking glass. It was the cellphone to the rescue, in this instance.

Yes, it is miraculous and bizarre, and a bit scary, that a satellite can find you and follow you – yet, apparently it doesn’t care where you are. But think about the miraculousness of a piece of paper that a) someone created, b) after someone trekked, c) after someone measured in distance and contour: mountains, rivers, oceans, roads, and drew it all in an organized system of scale.

Look at a real map and find those squiggly lines that snake up a mountain or alongside a creek. That’s the path I want to take, in this case not a straight line but as straight a line as nature provides, the contours of the land molded by wind and water. If we follow such paths, who knows where they might lead? 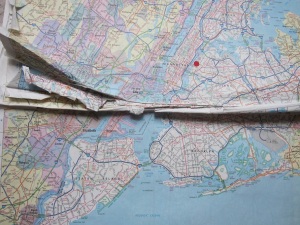