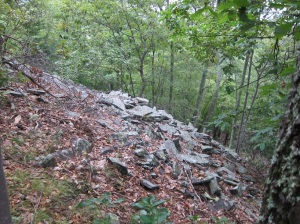 In this sucked-silent, away place there is something halted, something wrecked. Without even knowing what happened here, why it is what it is now, being here, looking down at this mountainside layered with broken lives, you feel a deadness, a dull ache, as if standing at the intersection where fear and sadness and abandonment all come together to form a corner of desolation. And, yet, there is beauty.

Up the river on crowded sloops, and on carts and in wagons, the jobless immigrants (so many of them from the north of the United Kingdom that soon, nearby, there would be an encampment called Irishtown) came here 150 years ago or so, because they heard that there was work, and a chance. The city had been crowded and unwelcoming, and those who were unlucky or unsmart, or who couldn’t or wouldn’t accept the sticky largesse of the criminal element among their own, or couldn’t stomach becoming part of those gangs and organizations, went north – some because, back in their homeland, they had been masons and cutters and this would be familiar work, while others would do anything, even this killing labor, to prove that they were worthy of the American dream’s promise. Here was where opportunity seemed written in stone.

This mountain, in fact the whole chain that it is a small part of, is full of bluestone, made of it. Here, quarries were established, and soon there were men all over the ridges and promontories, finding brutal ways to yank the hard stone from its rightful place, while the men’s wives either stayed at home or climbed steep trails up to the mountaintop resorts, where they made sure that rich patrons could lead a fantasy life far removed from any that these servants would ever know. The men, in the jagged rock pits, would work in partner teams: one would hold a pointed drill shaft in his bare hands, the other would swing a sledge hammer to strike that shaft lower into the stone. Both men would pray for unwavering focus and unerring accuracy, because one misguided downward arc and a man could lose his hand, or the use of it – and there are heartbreaking stories of wives forced to leave the men they loved, now crippled, who were unable to do the one job available, and these women marrying another man who could provide.

Later, blasting became a mining technique, and with it came increased injuries, and deaths, and the need for fewer workers. The irony is that the bluestone – sliced to size and shipped south – was used primarily to surface the sidewalks of the city from which these quarrymen had fled. Soon the invention of Portland cement provided a cheaper, faster, more pliable, replaceable and repairable walkway material, and the age of bluestone ended.

Up here is all that’s left of it, except for the occasional city pavement that continues to embrace its cut-stone legacy. Up here, it’s a stone graveyard – shards and chunks and great unbudging rocks lie about in the now-overgrown and nearly hidden work roads and sluices and cart-wheel paths. It is so immensely silent, and, yet, the littered cliffs and ridges make you hear the pounding industry that produced this debris of dismemberment. There are, here and there, perfectly cut and sized stone sheets, piled up, waiting to be hauled away – as if, one moment there was a loud and kinetic and thriving way of life and then in the very next moment it all just ended, everyone vanished, and all that is left is the physical evidence and the undocumented suggestion. Like a ghost town – like the Roanoke colony. Echoless echoes.

And, yet, this being-then-not-being should come as no surprise. Where these gouged stones and shavings now lie, where hordes of workers climbed and assaulted the earth, one can also discern, though just barely, the footpaths of the natives who walked here in a previous time. And, in locations, possibly linked and coordinated, tucked away on this and neighboring mountains, one can stumble upon cairns and liths and mysterious piled-stone structures, date and creators unknown. And among these stones, and among others that simply make up the land, one can, every now and then, find the finely etched remains of a creature that swam here when this pile of bluestone was underwater, and possibly just slurry soon to be compressed by the shifting earth and the rumbling glaciers – a living thing caught in mid-swim, in a life that – like the bluestone quarry and the lives that inhabited it – was and then the next second wasn’t. 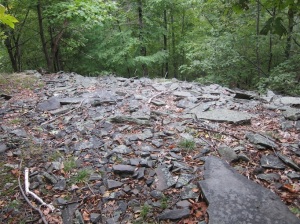