Sculpture parks are tricky places, trickier than you might think. If you have ever hung art in your own home, or placed garden objects in your own yard – carefully, that is, thoughtfully, intentionally – then you have a very miniscule inkling of what it must be like to populate a park. How does one place a two-ton object? A little to the left, I think. How does one visualize the art object in its site before placement? In a dream, maybe.

Oh, sure, there are computer-generated CAD renderings and even 3-D mockups, but it is nearly impossible to see the actual, as opposed to virtual, thing in its setting, unless and until it is there. And once it is there, it is there, on a poured base bolted into place. Sometimes, depending on its size, the depth of the moorings can penetrate various strata below the earth’s surface. The thing that is mystifying to me, beyond the physical maneuverings to seat the work, is that some works are situated just so perfectly, while others are not – quite the opposite, really. How can some be so right and others so wrong?

Storm King Art Center gets it right more often than not, having had its origins in display – this is still visible in the smaller works that are pedestalled and grouped around the museum building as a kind of bow to garden art (really good garden art, that is). But venture beyond the patio and the near planting beds and go out into the fields and meadows; that is where the relationships occur. Here, the Storm King team are masters of the setting and the pairing of art and site.

The only sculpture parks other than Storm King that I have seen come close to achieving this kind of parity are The Fields Sculpture Park, in Ghent, N.Y., and Nathan Manilow Sculpture Park, in University Park, Ill. All three of these mentioned have interesting land: mountainous terrain, undulating rural fields and prairie swales, respectively. Perhaps the choice of natural landscapes make the difference, but that isn’t the full story.

deCordova Sculpture Park, in Lincoln, Mass., has a perfectly fine site with rolling woodlands and lawns. It is possible that size does matter in these matters. Whereas deCordova has 35 acres, The Fields has 60, Nathan Manilow has 100 and Storm King tops off with 500 acres. The idea that deCordova manages pretty well in placing its works in a smallish-for-a-park space, and the fact that they are mostly temporary installations, gives extra points to their siting team. Impermanence is more challenging in getting it right; if it is not for posterity, endless design and planning would make less sense. 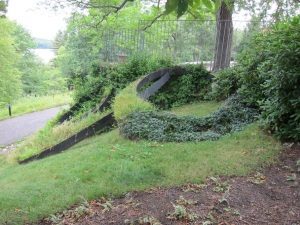 So, that being said, and with my not knowing which works are from the permanent collection or on loan, there are some worth noting at the deCordova as they relate to  art-and-site merging. Bob Boemig’s Sisters is surprising because it has the appearance of so many steel works that have come out of Abstraction and Minimalism, but these are rendered as elliptical planters filled with soil and myrtle. Resembling large hoop earrings with a Chia pet sensibility, they sometimes disappear into the landscape and then re-emerge, giving them more dimensionality than they really have. The interlocking geometric shapes, if not integrated with the land, might look something like the Olympics symbol. But their tilt, and the fact that they are on a steep slope, could almost lead one to believe that they grew there as freaks of nature/nurture. Conjuring images of old wagon-wheel rims lost in history and reclaimed by the site, they reveal a sense of time as well as timelessness. 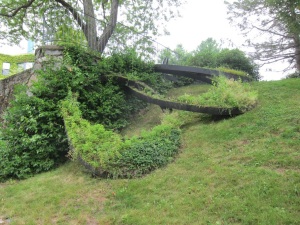 Okay, I am a sucker for train tracks, and George Greenamyer’s Mass Art Vehicle sits  atop a large rock outcropping, almost lurking behind some tall bushy growth. 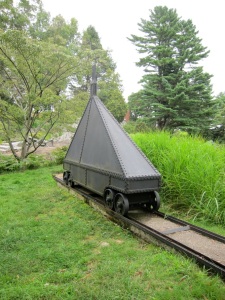 Its setting is a sort of miniature version of the very same landscapes that train tracks always seem to inhabit: rocky, nearly impenetrable mountainsides; high grasses alongside the railbeds; slightly hidden from plain sight; and the tracks disappearing – in this case, abruptly – into the horizon. Aside from the strangely militaristic, hard-edged toy that this object is, it peeks out from its lofty perch like a cupola on a rooftop. There is something both medieval and eternal about it. 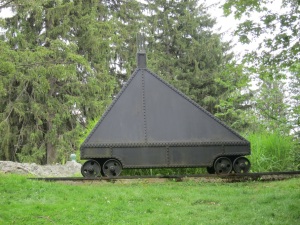 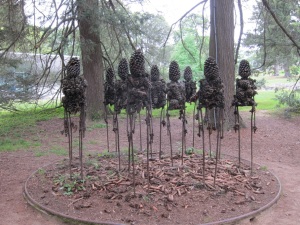 Then, if you can find it, Ronald Gonzales’ Cones is a work nestled in a grove of hemlocks, and is surrounded by nature. In fact, what surrounds the piece is pretty much the stuff that it is made of. About a dozen figures stand in some sort of unified group. They are made up of pine cones attached to steel armatures. There is a circular bed of cones on the ground below them. Are they decomposing as they lose their physical parts to the elements and time? Or are they regenerating, evolving, restructuring from the natural materials around them? The idea seems to be about death and decay. The group of figures is so reminiscent of nail fetishes, a type of African sculpture called Power Figure (Nkisi Nkondi). The low-hanging branches of the hemlocks are almost a camouflage for the figures; both have limbs that are so similar. That these figures stand in a cluster, like the encircling trees; that they are built of the same materials; that they are at the mercy of the natural environment – here exists the place where art and site become one. 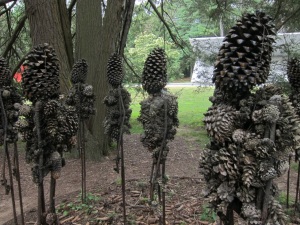 There are some sculpture parks that just don’t get the point of the exercise: that the works and the landscape should derive a mutually beneficial association. And I will add to that that the two elements should enhance each other to the point of inevitability, meaning that there could be no other arrangement for this art and this site, no other place could provide a more perfect union. I have witnessed this convergence of mind over matter, but its frequency is not commonplace. I have visited nearly two dozen parks and gardens and, while some are just outdoor display spaces, others are real integrations of object and site. Admittedly, it is difficult to achieve – there is an art to it. An art park should be artful, right? Artfully arranged, besides having good art. 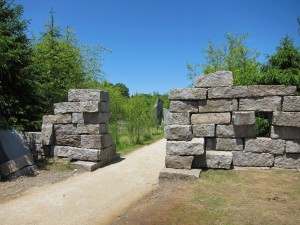 Arslocii is not about sniping. It is about finding positive experiences and connections, and attempting to point out the best examples. In this case, though, in looking for a meaningful experience at Grounds for Sculpture, we feel compelled to include a disclaimer of sorts, or maybe a preamble.

In its nearly twenty years of existence, this venue for large-scale outdoor sculpture has morphed from sculpture park to theme park, although maybe it always was the latter. As a concept, it was suspect from the get-go, the idea of an heir to a medical-supply company’s fortune, an “artist poseur” who appears to lack any artistic sensibility; witness his 3-D, Disney-esque tableaux of polychromed bronze replicas of paintings by real artists. (You simply haven’t lived until you stumble upon Manet’s “Dejeuner sur l’Herbe,” all solid and renamed “Dejeuner Deja Vu.”)

Feeling as if, possibly, I could be missing the point, I have been to visit the park three times: once soon after it opened, a second time about ten years after and again last week. My feelings are unchanged, and I have to say that the whole affair is a sad reflection on New Jersey’s significant sculptors, many of them represented in the park. Okay, you could argue that it is important to have a venue like this but, honestly, it doesn’t do justice to the art that it is supposed to serve, and it sadly mixes up the uneven quality of its holdings to a point (a cluttered one, no less) where the whole becomes homogenized and average. Yes, it has a lot of sculpture – more than 250 pieces; yes, it has landscaped grounds, in a rather suburban-style arrangement, and although there are artworks of merit in the broad collection they, generally speaking, are scattered about the grounds as decorative objects with no thought as to their sites beyond a pedestal mentality. In an attempt to create display areas, there has been much mounding and shaping of the grounds – which I must assume were originally pretty flat, it being south-central New Jersey. But now it is all very phony and gumdroppy strolling through a terrain that, at times, resembles upturned breasts, artwork frantically suckling for some sort of unavailable nutritional source.

Let’s just say, upfront, that the preservation and reuse of the site – a former state fairgrounds – was commendable; the land dates back for that purpose to 1888 and was the site of agricultural exhibitions, stunt shows and daredevilry, including a shooting match between Annie Oakly and Miles Johnson. Many of the extant buildings were constructed from the 1920s to the 1940s and they are architecture worth saving. The fairs occurred on these grounds for nearly a hundred years, and then the area was slated for development and went up for auction. The fact that the Johnson Atelier – a bronze-casting foundry used by many artists, including its namesake – saw the value of the land is fortunate, and not only to extend the life of a piece of New Jersey history but also to make the site viable, which it is. 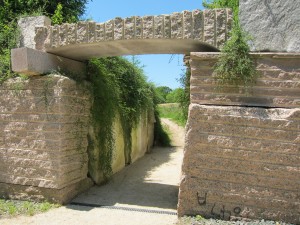 But this blog is focused on finding placeness, and sometimes, even in the most unexpected situations, it can happen. Unfortunately, here it has nothing to do with the artwork, and not even most of the gardens. The best thing that this park achieves is the transitional spaces: the paths made of steel grids and gravel; the maple allee – a narrow curving walkway with densely planted trees, more an alley than an allee; two stone tunnels that connect gardens but feel like tomb entrances; a wisteria arbor that is like another more garden-y tunnel; a rock cliff as a dolmen entry; and, nearby, a stone-walled portal reminiscent of a Mycenaean tholos. All these passageways have what most of the sited and designed areas they connect do not: a feeling of place, a unique connection between the obviously manmade component and its setting. Interestingly, they are feeders to what are supposed to be the main events, but they have more life in them than the destinations do, as if more thought went into them than did the selection and placement of the sculptures. 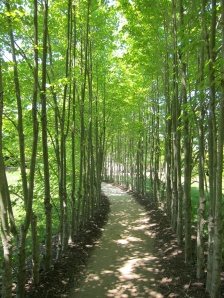 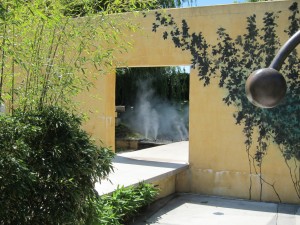 And, too, there is another larger space that works to good effect – again, not because of the art. The Water Garden, a tad over the top but still compelling, is a walled courtyard, a group of interconnected rooms that all have water in common. Attached to the Domestic Arts Building, this enclosed and hard-surfaced garden gives the courtyard garden in Jacques Tati’s “Mon Oncle” a run for its modernist money. Extremely geometric with high walls, there are changing elevations, some rooms are open while others are more hidden, window cut-outs both high and low allow glimpses into other rooms, water moves through and around it all. There is just about every kind of water feature one could imagine, some still, some flowing: pools, fountains, rivulets and runnels, steam, bubblers, waterfalls, rain. Although there is complexity in its puzzle-like spatial flow (if you look up, it could feel like you are in a rodent maze), there is a strong sense of place – something rare in the park at large. There are references here to Persian gardens, cloister gardens and, too, the Hirshhorn Sculpture Garden. Of course, it is not the Hirshhorn, in its design or in its collection. But there is a thereness to it. On the edge of kitsch or even the stuff of malls, this courtyard manages in its use of space to find itself, to find us in it, and to make our experience special, something beyond the fray. 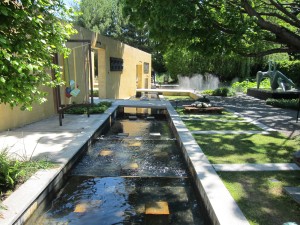 It is, after all, what we seek. And it can be found. Even here.