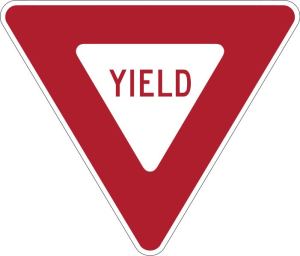 Our world is dotted with signage. Daily, we are bombarded by advertising, street, warning, directional and traffic signs – all in place to attract our attention and give us instruction of one kind or another. I have had a lifelong fascination with the “yield” sign. Back in my 4th- or 5th-grade classroom, our teacher asked if anyone knew what the word “yield” meant. Now, I was not one of those kids with a persistently raised arm, but I decided to give it a go. I was clueless as to what its definition was and I probably had never used the word before, yet alone heard others use it in conversation, but I deduced its meaning based on my observations of how people behaved wherever yield signs were posted. I answered, “Give way.” This was a significant moment for me in the powers of observation and deductive reasoning.

The yield sign originated in Tulsa, Oklahoma, based on a collaboration between a traffic engineer and a police captain (Rice and Riggs) around the mid-20th century. Originally it was a keystone shape in yellow and black and, over the past sixty years, has changed into a triangular target design in red and white. The thinking behind creation of a yield sign was that often a full stop wasn’t required, but rather a cautionary slowing and merging, especially where a less busy “feeder” street intersected a busier “collector” street. Yield signs became de rigeur on highways and expressways at the points of one-way intersections, such as on-ramps. Always found at points of convergence where one fork has precedence over another, they create a kind of road hierarchy. 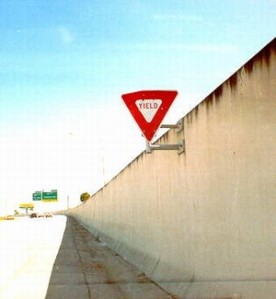 If you asked a child of 9 or 10 now what yield means, based solely on observation, they might likely guess, “Speed up.” That is the interpretation so often expressed by drivers faced with the triangle. So, who’s place is it to give way? Obviously, it is still the one with the yield sign, the one entering the flow of traffic. For those who have never experienced traffic circles, they operate in pretty much the same way – entering traffic slows (or stops, even) for the traffic already in the circle. Of course, on highways there is an unstated courtesy of the car in the slower flow lane to move over to the left, if it is safe to do so, to accommodate the newbie entering on the right. But that is not always possible or sane to do, depending on traffic volume. And it is not the law, in contrast to the stated yield sign.

As cars have been made more adept at reaching 60 mph in 10 seconds or less, is it mainly for the purpose of breaking the laws of yielding the right-of-way? Americans don’t like to yield – they like others to yield to them: their land, their labor, their property, their sense of self. Apparently, on the roads, too, letting others yield is the preferred method. No one wants to give an advantage to anyone else, and it is reflected daily on the road as the yield signs are ignored. I guess the question is: Why do we still have yield signs if they mean nothing? Granted, they are one of the most attractively designed signs on the road and I would hate to see them disappear. Moreover, we still do need the yield sign – maybe even more so today than in the kinder, gentler, more naive times when it was devised. The problem comes in when drivers choose whether to obey them. 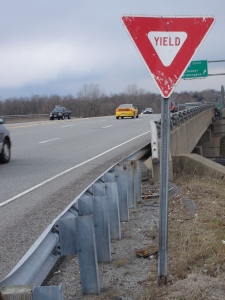 A place can be a point of convergence, or a choice (in this case, both); and a sign is a wayfinding device or an enforceable rule: the physical manifestation of a law that is supposed to protect us from our worst selves. Yield signs, for me, have a kind of placeness, marking a juncture, acknowledging crossing paths, suggesting union, showing that there are others in the world and that, sometimes, you must surrender, slow down and merge. The yield-sign lesson that day in grade school, perhaps, had that element, too – of learning to give way, not only when traffic merges but maybe in other situations as well. These days the message seems to have lost its meaning. Or maybe the problem is that no one knows what those red-and-white triangles mean. And, too, it reminds me that it is not only a traffic-control device but also a moment of understanding and reason, a place of awareness and the artful grace of acquiescence. Too bad not every driver had that moment in the classroom. 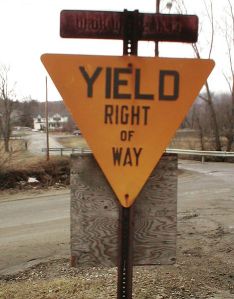