When it comes to most houses, the front steps are usually shown the servants’ entrance. Next to what real-estate agents like to call “curb appeal” – the fetching come-hither look of a property that makes you want to stop your car and see more of the place – the most important first-impression portion of any house is its front step … and, yet, it is, in arslocii terms, one of the most terribly overlooked, in all senses of the word.

Money is spent on the front yard, on the path to the front door, on the plantings bordering the front step … but, then, those few flat rises to the door are usually just … flat. After what should be an orchestrated, even ceremonial transition from public space to private, the visitor ends up walking onto and standing around waiting on beige or brown or gray, poured or sliced or milled rectangular solids of no consequence. 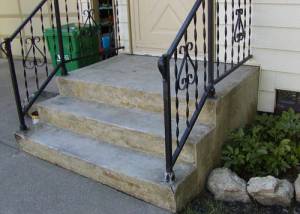 What a wasted opportunity to create a place for art, a place that, even before the front door opens, tells the visitor something about the personality of the house and the people who dwell in it. It’s an unfortunate dead zone instead of what could be not only one of the best and first greetings to a home but also an unexpected place for creativity and even wonder – an opportunity to create placeness.

All that most people do is cover the top step with one of a slew of same-old, same-old cookie-cuttered, mass-produced mats – rubber or cocoa fiber or some synthetic approximation of one or the other of them – with pre-fab designs or T-shirty/bumper-sticker-ish verbiage that can be found by the truckloadsful (and the shiploadsful, coming from Taiwan or Sri Lanka): “Welcome” mats that coyly say “Keep Out,” mats with flowery or geometric patterns, mats with representations of the kind of animal one will encounter and surrender his pants cuffs to upon entering the house, or the sort of weapon the householder keeps at hand, or the politics that might explain the weapon, mats that stake a claim to the turf by having owners’ names imprinted on them … this stuff, available in stacks in big-box superstores everywhere is, apparently, what goes for “personalization” these days, as well as a signal of current American standards. 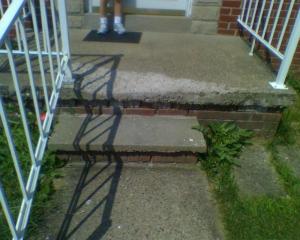 But there is nothing personal about them; in fact, just the opposite: they trumpet conformity, the safety in numbers, the lack of introspection, the absence of a certain kind of pride. More thought goes into the selection of the brass-or-brushed-chrome doorbell and “custom” house numbers than this precious portal plot.

We don’t say that making something of your front step won’t take some effort – it will, if done right. But, you may ask, why do it, if it’s not easy, and so few people will see it? Because, besides creating a special, hip and hidden spot, when done it will not only be something that is by you but also something that is you, something of you that extends beyond the doorjamb to envelop your guests – something that, conceivably, will live on after you, or just until the next owner puts her imprint on the space.

Take the example, just below. Once, unadorned cement steps projected directly out from the front door to the sidewalk. The homeowners, while using privacy and separation from the street as the incentive, reoriented the steps to rise alongside the house. At that point, a simple brick or block wall to enclose those steps would have been the easy, rote thing to do. But with a bit of artistry and vision and a desire to express the individual likes and tastes of the owners, an Art Deco-inspired wall, complete with porthole, aluminum stripes and Streamline tapering became a landmark on the street, a unique, unmatched statement.

And then, even more: On a lower landing and on the top front step, on the spot where a typical mat might have been slapped down, there are owner-designed and -installed mosaics – a greeting and a tease of what (and who) await the new arrival. A blending of art and place, of pure function and pure imagination. Arslocii.

Is it asking too much to hope that homeowners will see this “bonus room” as an opportunity for self-expression, even self-revelation, and that they will take a step in the right direction?

Size Matters (but not the way you might think)

We took a tour, last week, of Philadelphia’s Art Deco architectural treasures. We live in Philadelphia, and happen to be familiar with all the buildings that ended up being on this particular show-and-tell, organized under the aegis of the city’s Preservation Alliance. But, when one is in pursuit of examples of placeness as art, it’s easy to overlook the right-in-your-own-backyard obvious and known; guided group perambulations-with-purpose have a way of jogging one’s memory and taking disparate elements and free-floating thoughts and bringing them together in coherent focus. You come to realize, suddenly, that the things you didn’t know you were thinking about were, really, things you were thinking about a lot – just maybe in different ways.

Philadelphia is a wonderful place to look at the history of architecture in the United States – so much of what has been built over the past several hundred years still stands and is being used, beneficiaries of a strong conservative bent, a general thriftiness and development that began at the Delaware River in the 1600s and marched in an organized, gridded fashion westward and outward, leaving a timeline of changing styles, construction advancements and reformulated population patterns, needs and wants in its wake. Colonial? It’s here. Victorian? Yes. Gothic Revival? Beaux Arts? Federal? Check, check and check. One can glance down almost any street in the downtown area, known as Center City, and see a row of office and residential buildings cheek to jowl, each from a different period, living in an organic harmoniousness.

There isn’t much Art Deco in town; it was, perhaps, too shockingly outre for staid, Quaker-ish Philly in a period roughly spanning the years from just after World War I to just before World War II. The 19th century still held stylistic sway at the start of this time and, later, restraint and retrenchment in the name of recovery was in the air. What there is of Art Deco here isn’t as flamboyant or defining as the examples to be found in, say, New York City, or Miami, or Los Angeles. But there are some nice examples – mostly built to be headquarters or regional outposts of large corporations or broadcasting companies, Big Oil and Big Transportation.

The tour guide showed us these buildings – all tall, with soaring verticality, many with terra cotta ornamentation, some Moderne, others Mayan-influenced. We entered lobbies modest in girth but glittery still, with streamlined elevator doors, monumental mail boxes, terrazzo and brass, aluminum and gilt. Impressive spaces created as coordinated and complete visions, from door knobs to desks to signage – all with the look of the promise that began roaring in the ‘20s and careened, a bit drunk, into the financial and world-war abyss. A sliver of time, with an outsized and ongoing influence. For the United States, one of the last times of un-ironic optimism though, like most of our optimisms, doomed. 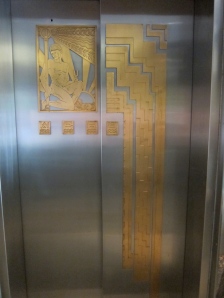 We at arslocii are Art Deco aficionados – buffs, even. We live in reimagined Deco surroundings, we’ve traveled long distances to see Deco buildings and artwork, we believe firmly that it was a glowing time and that Donald Deskey, Raymond Loewy and Henry Hohauser are demigods. Yet, as our tour guide pointed out the set-back facades, the patterned grille work, the glazed spandrels, the symbolic renderings – all this, coupled with our affinity for the modality, and yet … we were left lukewarm, admiring but unmoved, appreciative but not enraptured.

There was no placeness there. But why? These buildings, inside and out, were intentionally designed to be different, to be art, to be places redolent of placeness. Their out-of-placeness should have, could have imbued them with placeness.

What was wrong with this picture?

And, then, we saw them: Just across the street from one of the tour buildings were two short, relatively inconspicuous structures, literally overshadowed by the Deco tower we’d just exited. This attached pair of modest commercial properties – one very Deco-ish, the other a bit older in affect – struck us, instantly, as having everything that was missing from their bigger siblings, including and especially placeness: their simple but perfectly proportioned and resonant lines, their shy but glamorous attitudes, their under-adorned but bejeweled facades. They weren’t trying as hard as the big buildings to be big: no huge gestures, no forced glitter … yet, wonderfully alive and, it seemed, real. Authentic, not just of style but of heart. And built to human scale. If one finds them breathtaking – and one should – it is because of their honesty and not the flaunting of their corporate owners’ budgets. 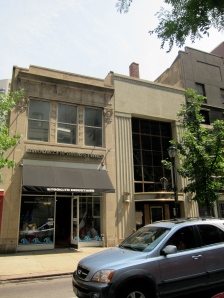 What it comes down to, it seems, is scale – in physical size, in architectural ambition – and the seemly gesture; accessibility – physically and intellectually – and the successful provision of just enough and not too much. A viewer feels that he could wrap his arms around these two buildings in a happy embrace, and they around him.

Lessons learned here: One can stand tall without being tall; one can have placeness without being built to be a place. It’s a magical thing – alchemical, even. And inexplicable. It just happens. Thankfully, it happens here.