The case for trees is an easy one to make. 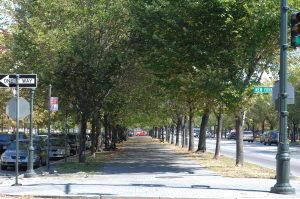 The benefits of including our tall arboreal friends in our environment are without dispute, and numerous. Survival for us and, too, for everything on the planet would be impossible without trees. They breathe oxygen into us and provide needed atmospheric recycling of moisture, among other notable biological processes. They air-condition our world, especially urgent now because of climate change, a result of our reckless disregard for other living systems, and our ignorant belief that our desires are the most important and necessary.

Lecturing aside, trees are awesome in almost every respect.

Our interest here, though, is to discuss the psychic benefits of trees and their transformational character in determining and creating placeness. They are major players. But, rather than repeating the scientific data, we are going to give first-hand anecdotal examples.

Our street, a 19th-century vestige of an industrial mill town, is urban and hard-surfaced, a layered mix of stone and cement, and nary a growing thing except sidewalk-crack weeds. In fact, directly across the street from us, on a cement porch, are some flowers in containers – artificial flowers – freakishly colorful (though fading) year round; neither rain nor sleet nor snow nor dark of night shall stay them. One wonders why people are so willing to substitute facsimiles for the real.

Within five years of inhabiting our house we went on a quest for trees. In city-speak, “street trees.” Our park system provided two for free; that was disappointing, since they had promised four, but we added two others, plus a few more within our small courtyard. The lessons learned from tending and watching these trees and the difference they have made in our lives are enormous. When they were small and vulnerable to human assault, they were vandalized mostly by the mindless pulling off of the leaves – ironically the very thing we wanted them for. One night we heard a snapping, crunching sound, and looked out to see a bunch of drunks that had just broken off a sizable limb from one of our trees, carrying it off over their shoulders like natives back from a hunt. To do what with it? We don’t know. To be imbeciles, for sure. But since that moment we became crazed guardians of our turf and our trees. Happily, that level of destructive behavior never happened again (until bulldozers and other tall street-paving, house-building, cement-pouring vehicles started showing up twenty years later in our gentrifying neighborhood).

As the trees grew, space changed around us. There was the defining of space through the demarcation of lines and boundaries, creating a buffer zone and a filtering between street and pavement, as well as a sense of our space versus the larger general space. And the tree canopies formed another kind of space above, a soothing and calming enclosure of shade, not only for our facade’s southern exposure and our courtyard’s leafy shelter, but for encouraging walking as opposed to running and screaming (mostly what happened within the barren no-man’s land of hardscape). There seemed to have been, until then, such a total disregard by inhabitants for the dead zone of the streetscape, almost as if because it was so devoid of life it was beyond control or caring, that it was an edgy, uncomfortable place that had to be passed through but was not valued other than for parking or driving or raising hell or tossing trash. We firmly believe that lifeless areas produce lifeless thinking.

There is no way to know whether our trees are directly responsible for altering the landscape in more ways than one, but we think they did. There are the wonderful sculptural shapes of the trunks and limbs sans foliage that cause shadows and lines, which we value and enjoy in the lower winter sunlight, but our sense of being enveloped in a treehouse goes missing until spring. And during the leaf season, we have both interior and exterior dappled light and wind-carried movement at every vantage point. Birds and squirrels add another level of reality. We have watched a certain squirrel (or, more likely, generations of them) lie prostrate on one of our second-story limbs and doze off; this year, we discovered a large squirrel nest in that same tree, although we  have never seen baby squirrels. 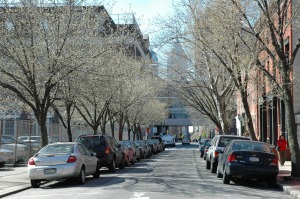 We have observed our trees since they barely reached the second-story windows, and then watched them reach the third (a truly amazing moment when they became real trees) and beyond. And, over the course of these twenty years, we do think that our trees have changed the personality of the street for the better: quieter and less aggressive; occasional sporadic bursts of noise rather than sustained loudness; containment and control as opposed to wide-open nothingness; softness and curvy shapes to help balance the hard rigidity of buildings set up to the sidewalk. Of course, there are neighbors who have despised the trees from the first day, maybe more so now that they drop more leaves, and one person in particular likes to inform me about high winds causing the trees to sway – a perceived threat to her, a comfort to me.

Another interesting change that has gradually taken place is concerning dog waste and the people who do or don’t control it. In most instances, we have found that if you show that you value something, even something as meaningless to many as a tree, then they too will value or respect it (unless they are sociopaths). For years, as the trees struggled to achieve height, they and their reclaimed pits were treated as small dumping grounds for cups, bottles, cigarette butts and dog droppings – especially dog droppings, since there was no other non-concrete spot for squatting. Of course, it is the caliber of the dog-walker that makes a difference, but when we put low-profile fencing around the pits (only two of the four pits got these), behavior changed. New dog-walkers had bags to scoop up what was deposited and, quite often, dogs were led right past our trees on a mission to other sites.

Sometimes it’s hard to get used to the idea that the trees have become a “given” and are not treated as something to be attacked or abused. Sadly, no one else has followed suit in planting arboreal companions for ours – yet. We stand alone, but we stand tall and a bit cooler than anyone else in nature’s shade, despite the overwhelming ratio of hard surface to soft. Our place has the qualities of an urban oasis, its appearance of placeness and the sense of placeness it exudes – all thanks to trees. We couldn’t live here without them, and we wouldn’t want to.