Right up front, Woodstockers will tell you that the famed rock concert didn’t happen there. Of course, this will not stop them from trying to sell you an “authentic” souvenir commemorating those three muddy, giddy, iconic and inimitable days of peace and music. And why should it? The show might have taken place in Bethel, but it got its name from the town that spawned the idea for it and lent its considerable good vibes to the proceedings – good vibes that exist there to this day, in much the same way that they did then. Manhattanites come, old folkies go, but, to an extent that is almost miraculous, Woodstock remains Woodstock. The concert happened nearly 70 miles away and 45 years ago, but the echoes reverberate still off Overlook Mountain.

Come into town (we were heading in from Woodstock, Vermont, via Massachusetts), along Route 212 or down 375 (what is soon to be known officially as the Levon Helm Memorial Boulevard), take a gander at the mountain range all around, and then notice primarily what is not in the village, the central core of the town: except for a couple of national-brand pharmacies, there is no big-box store, no chain restaurant, no big-name shop – this is by design. Woodstock wants none of that, thank you. There are more Buddhist prayer flags than American flags (not that it is an unpatriotic place, it’s just that it has its priorities), and more ponytails per capita than most other towns – and that’s just on the men. Where other village greens in other towns display old cannons or heroic statuary, Woodstock, N.Y., has a Peace Pole. It also has, on warm-weather Sundays, a drum circle, complete with volunteer dancers swaying in abandon, and a bizarre Father Woodstock – dressed like a sorcerer by way of Sergeant Pepper and Doug Henning – giving peace signs to passing motorists.

It’s the boutique-y shops, oddball businesses and natural beauty that attract weekend tourists to this oasis in the Catskills just two hours north of New York City, but what draws artists and writers and musicians to make Woodstock their home, even if they’re just weekenders, is that it is a place that, since the early 20th century, has been a gathering place for the creative of word and deed and imagination. The town calls itself the Colony of the Arts; its town crest hasn’t the usual symbols of government on it, but, rather, representations of painting, theater, music and writing.

It is a town with a laissez-faire attitude toward outsiders and art-makers – it is known as being a place where you don’t have to explain yourself or your oddities, and a place where those attributes might even be celebrated. There is even a cemetery dedicated to artists. Folks from Milton Avery to Joan Snyder, Bob Dylan to Steve Earle, The Band to Donald Fagen, Helen Hayes to Uma Thurman have all called Woodstock home at one time or another. Even David Bowie’s around there somewhere. These days, real estate is a bit pricey, and younger folks are taking their artistic baby steps in outlying smaller towns and in the nearby city of Kingston, but even they know that other places are for paying your dues – Woodstock is the reward.

We began our Woodstocks wanderings with the intriguing though half-baked concept of touching base with as many towns of a similar name as possible, and seeing if there were any commonalities. There weren’t many – shared names, even if from identical origins, don’t mean that there are any other similarities. They weren’t separated at birth; they don’t have shared DNA. Woodstock, Conn. and Woodstock, N.Y., might just as well be in different countries. What they do share, though, is a sense of what they are, a solidity of values and a refuge from urban woes. They are all relatively small outposts, and they have lives beyond the shadows of behemoth cities. They all have nice people. Maybe what they share is a kind of goodness, a spot of safety and the sense that if all the rest of the world starts slipping down that drain with a loud sucking sound, they will not be going that way, or if they are, they will be last.

What we came to realize, too, on our road-trip journey was that next time we will try a different theme: Paris, Texas, sounds good as a starting point to get us to that other Paris; or maybe Athens, Georgia, with that Greek namesake as the endpoint; there’s also Rome, N.Y. and Berlin, N.J., and we could stretch things and go to Notre Dame in Indiana, or Venice Beach in California, and find our way to those foreign places that come to mind. Finding our Woodstocks was grand, but there’s a whole, other, places-with-similar-names world out there. And, of course, there’s still Woodstock, Ga., and Woodstock, Ontario, and …

When we vacation, we tend to overpack the car, point it in the direction of compelling, sometimes overlooked places and make our way with a stack of printouts as our guide. That is how we found one place we keep going back to – a place that so immediately and completely and naturally became “our place”  that it was like discovering that you‘d been adopted and now you’ve met your biological family and, from the get-go, in some weird pheromone-ish way, simply “know”” them; it is our Brigadoon, arising out of the heather mist, periodically, in our time but of its own; a spot that lies nestled at the foot of mountains named Guardian and Overlook – how can you not love the protective hug of that? It is Woodstock, New York.

There is, for us, only one Woodstock, but, we have found out that there are, indeed, other Woodstocks – a bunch of them: two in Canada, at least five in the U.S. alone, three clustered in the northeastern portion of the country. Having visited none of the others, we wondered what they were like, and how they compared to our/”the” Woodstock: Was there another Woodstock that we would prefer or be more enchanted by than the one we’d come to hold close to our hearts? Would the others be home to the same kinds of characters and outliers and land’s-enders as the New York Woodstock? Would any or all be a colony of the arts, as ours was? Might there be something common to all, and if so, what – besides the name? And by these wonderings, and with a bit of vacation window open in front of us, we hatched a plan and devised a route, a circuitous trail of mostly back roads, a few highways, mountains and valleys, inns and b&bs, sculpture parks and natural wonders, but all with a central purpose: to arrive at our Woodstock, eventually, by way of other Woodstocks, the ones we could reach in our allotted time. What would we find in our quest of Woodstocks?

Connecticut, like New Jersey, can be seen by outsiders as a pass-through DMZ, a bedroom-community corridor between New York City and New England, a freeway ramp to Boston. Really: What pops into your mind when you hear the word “Connecticut”? It has a reputation for insurance (Hartford) and the first native-American casinos (Mohegan Sun and Foxwoods). For us, in Bridgeport, is one of the best vegetarian restaurants in the country: Bloodroot. The fifth state in the union has no major-league professional ball teams. There is no love song written to it. It has a Woodstock, though – actually, six of them. And, coincidentally, we have a good friend in the town in New York who grew up near (if not in) this town, having attended the Woodstock Academy, in Woodstock, Conn.

But wait, six Woodstocks? The way we understand this is that six villages –  South Woodstock, Woodstock Hill, North Woodstock, East Woodstock, West Woodstock and Woodstock Valley – make up the town of Woodstock. Just as an aside, the New York version is a town made up of twelve hamlets. But with New York, the other hamlets don’t have variations on the same moniker.

They call the northeasterly part of Connecticut the “Quiet Corner,” especially in contrast to the roaring and belching interstates and the denser urban pockets to its south, and it is here where Woodstock is. And Woodstock is, as the regionalized name indicates, quiet. Farms and vineyards, antiques and b&bs (we stayed in a sweet and quaint place, Taylor’s Corner B & B, along a country road, although, truth be told, every road there is a country road, really). There is not, to the underinformed visitor, much or any of a town, but rather just rolling green acres and homes and occasional shops. 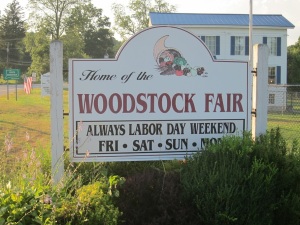 Woodstock is a rural enclave and the people have fought hard to keep it from being over-developed. In this town you are more likely to find frogs and fireflies than lattes – and that is a good thing. It celebrates its history, with one of the original town homes now housing its historical society – and behind it is a nice arboretum/garden with a strolling path – and its agriculture, evident in the large millstone standing upright at the town center and its annual fair. 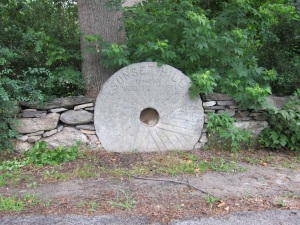 But it also has a notable landmark in Roseland Cottage, a pink-painted Victorian gem that once hosted the rich and famous, and is now a tourist attraction. It was influenced by the designs of Andrew Jackson Downing, has a lovely formal garden, and sticks up like a shard of gingerbreaded coral by the road.

(It would seem that if you want a town with more commerce and centrality, you need to make the brief slide over to Putnam or Pomfret. An eatery called the Vanilla Bean, in Pomfret, appears to be the popular populist gathering place for the area, and provides a bit of local color – you’re as likely to find biker gangs as suburban families there.)

With Woodstock flowing into Pomfret, and with not much of a town center to Woodstock at all, it is often difficult to know just where you are (of course, there a lot of people in the New York Woodstock who aren’t quite sure where they are, either), and this is compounded by the fact that it is a divided Woodstock, with its six sections, each flowing one into the other, with occasional signs but without definitive borders. We tried, as best we could, to visit all its parts – we may have, but couldn’t quite tell for sure. Like many New England towns, it is cute and historic, and this one is a good reminder of our early American roots. It is its own Woodstock, albeit, to our eyes, with nothing like the placeness of ours, but an original nonetheless.

Next installment: Another state, another Woodstock, and scaring moose.