So much of the arslocii experience – the feel of placeness commingled with the mindfulness of art, held together, often, with a tissue-thin wrapping of empathy – has to do not only with presence but also the present. The perception of art and the strength of its impact has, as a key element, to do with time – the time of day you see it, the length of time you’re with it, the time in your life you perceive it.

There are some loci of placeness that affect you no matter the time variable: morning, night, spring or winter, at a youthful age or in later years, these places just have that ineffable “it,” a charisma, a baraka, making us feel as if we are being reunited with an entity from which we were separated at birth. A memory, recalled. But, for most other place experiences, time is a defining factor.

I am not one, American though I am, who thinks that sports is art, or an art; in many American minds, games and athletes seem to have supplanted art as a high, or even highest, form of human attainment. But I am certainly aware that, from art’s very beginnings, the athlete in the midst of some physical endeavor has been a subject-matter honorific staple, from the kinetic grace of the discus thrower to, God help us, Leroy Neiman’s drippy-gloppy Playboy-era renderings. Yet, every year for the past two-and-a-half decades of my life, I have found myself drawn to a sporting event that passes  by not far from where I live, and in it I have found something artistic, and even something arslocii.

It is a bicycle race that runs for more than 120 miles, circling through the city, and, in its looping course, coming multiple times up a ridiculously steep hill, nearby, that tests the strength, agility, ability and smarts of the participants. They call the spot “The Wall,” and when you hit it, you really hit it.

It has become something of a tradition with us: We get up somewhat early; the race begins at 9 a.m. about 7 miles away. Sometime between 9:15 and 9:30, the racers have made their way to our area, to attempt their first ascent. We know, attuned as we are now, when to start out and how long it takes to walk the two blocks from our house to what has become our favorite viewing spot along The Wall, so that we can see the cyclists, already miles into what will be a grueling day, struggle up the hill. That time of morning, even on what will inevitably become a drainingly hot June day, it is still crisp, even a little dewy. The sun hasn’t yet awakened and realized that its job is to help the vendors of high-priced cool liquids. The crowds – and this race, and especially this particular part of the course, attracts perhaps thousands – haven’t yet arrived. The cordoned-off street is sparsely populated with aficionados, or, like us, traditionalists, and neighbors. Good vantage points along the barriers separating viewers from participants are easily had; in an hour or two they will be filled, three deep in spots. You can almost, at this moment, taste the anticipation, smell the potential energy. We few, we happy few, we still half-asleep few, stand by the barricades, look down the hill, and know that something wicked-good this way comes.

And then, it’s here: First, the sirens and horns, and the police motorcycle escort rumbles by in perfect formation. Then, cars with race officials, and media, and friends of the sponsors, roar by, honking and blinking their lights, trying to convince us that they, too, are in the race and not just gladhanders. We viewers move even closer to the metal grating of the portable barriers, and we grip the top rail of them, and lean out over them, to get the first glimpse. 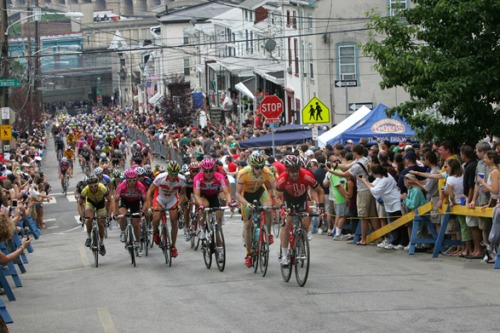 And here they come: At first, just a row, then a group, then a phalanx, and then a sea – of multi-colored team uniforms and helmets, from a distance a strange oceanic wave rocking back and forth in rhythmic fashion, drifting closer. And then, they are at our side, this peloton, these athletes, already laboring to make it up the hill, of which there is much more to go from where we stand. The cyclists’ faces are grim, determined; their arms, taut on the handlebars of their aerodynamically austere bikes; their calves bulging, already on the edge of cramp. Dozens, a hundred, swoosh by, and we greet them and celebrate them with cheers, and whoops of encouragement, and the clanging of cowbells, a welling up of not only human kindness or sports fandom but an empathetic desire to give them our strength, a gift that will help propel them up the hill and send them on their way more easily. For a moment, we give them us – an odd symbiosis. The cyclists are not artists, and what they do is not art-making, but there is art in the color and kineticism, and in the relationship between us and them. Not Art with a capital A, but art that rhymes with heart.

And then they are past and gone, except for a few stragglers, whom we give our loudest cheers and deepest support, to urge them to keep going, keep at it, catch up with the pack, go for the gold – and, once they’ve struggled past, in the residual roiled quiet we make our separate ways home, as if from a dream, or to return to one. The race will go on, most of it without us. But we had that moment. Alone, individual, we shared it.

Or, that is, we used to. This year, the real world encroached, and financial considerations caused the race organizers to pare down the event, cutting the 14-plus mile circuit from 10 loops to seven. And the way they decided to cut was from the top – that is, the race started at 10:45 a.m. Which meant that the first assault on the hill didn’t arrive at our location until about 11 a.m.

The later time changes the way we see it; it feels different on our skin; our noses sense something else, something more already-used; our bodies are not as tight and stiff as an early-morning body is; there are more viewers, and not just our in-the-know veterans, but callow interlopers; it seems to be no longer our turf but just another place. And when the cyclists do appear, there is something indescribable gone – they are no longer a cloud of fantasy but some bunch of bikers, interrupting our brunch. There is still excitement, of a base sort, but what was once special, magical, unintentionally but definitely artful, is now a reminder of a world ruled by and transformed into a commodity. The thrill is gone, and with it the magic.

And so is the art. And the placeness. When the experiential elements alter, even by a few ticks of the clock, the world is a changed place, as are the events in it.

To paraphrase Woody Allen’s oft-quoted bon mot about success, 80 percent of arslocii is showing up. The other 20 percent is showing up at the right time.

Cosmo’s Moon and the Placeness of Love

In just a couple of weeks it will be exactly 25 years since the first day of shooting began on one of the most perfect movies to come out of the post-Viet Nam-era Hollywood: Moonstruck. For its success and enduring, endearing nature credit John Patrick Shanley’s quirkily adorable screenplay full of memorable lines and people and confrontations, exceptional and lucky casting (Cher and Olympia Dukakis are earthily sublime revelations, and no one, any place, any time could be a better Ronny Cammareri than Nicolas Cage), savvy use of Dean Martin crooning “That’s Amore” and Norman Jewison’s steady don’t-get-in-the-way directing.

Whereas, in his films, Woody Allen loves Manhattan, Shanley’s New York – Brooklyn, specifically – is love. More than just another character in the narrative, the soft-edged and warmly glowing Brooklyn of Shanley/Jewison is a place that must exist first so that its characters can exist after. It is a place, unreal in life but absolutely believable if not necessary in our hearts, where love supreme not only reigns but is operatically intense, where shadowy streets hold no menace, where superstition and religion and mortal foibles and Fate’s delicious hand-mangling irony are as thick in the air as the bakery and cooking smells we imagine are everywhere, where jerks are lovable and moral cheaters are as innocent as children – and it is a spot on Earth (some Earth, in some dream) where the moon is bigger than possible and exerts a pull that is not that of the physical world’s gravity but quite the opposite: anti-gravity, an irresistible force that moves immovable objects, like deadened hearts and desiccated relationships, and grants them life and youth and hope.

There are certain key elements that a film needs to be great – mostly, these have to do with character and motivation, action and satisfaction. A film can be great if it doesn’t have all, but most, of these elements (forming what weak-headed critics would call “flawed” films). But no film can be great without a placeness that gives every person and plot component its raison d’etre. Movies have people and plots, but what the best movies do best is create believable worlds that, empathetically, we already somehow know and recognize and crave. Placeness establishes the rules and referees the match, and only then can the games begin and follow their course. And, with a great sense of placeness – Oz, or the Corleone compound, or Xanadu – one cannot conceive of a film’s events occurring anywhere else. Every life form, movies included, needs certain conditions in which to come into being, thrive and evolve. Another place, another species. A lesser place, no life at all.

Moonstruck is a masterly bit of created placeness in a bubble of benevolence, like a glass-enclosed terrarium, a self-sufficient ecosystem unsullied by an outside world’s contaminating breath – truth grows undisturbed while reality bounces off the protecting globe.

As a P.S. to all this: What Moonstruck wants to express, at its core, is the messy, complex, intertwining, toxic yet life-giving nature of Family and families. Tomorrow is Thanksgiving. When you’re together with your own blood-related or handpicked family, there could be no better place to visit, all of you, post-stuffing, than Moonstruck.

Salud – and snap out of it.