In a complex convergence of architecture, landscape and artwork sits the Abington Art Center. Originally an estate named Alverthorpe Manor, the house was replaced in 1939 by a Georgian-facaded Art Deco interior, retaining its name and the lovely 27 acre site and filling its then newly built museum wing with an impressive rare-book and prints collection which was generously shared with visitors and scholars. The owner, Lessing J. Rosenwald left the property to Abington Township, Pennsylvania, and his collections to the National Gallery and the Library of Congress; afterwards, a local art guild moved its operations into the property to serve as an expanding cultural center for the community, including a sculpture garden in 1990.

The grounds are close to ideal for this purpose with varying terrains of stone-walled terraces, sloping broad lawn and vast woodlands. Generally speaking, the scale of the art pieces is smaller than one would expect in a setting such as this, the few larger works having been sited closer to the house; and the woodlands tend to be occupied by environmental works that intentionally disintegrate over time – politically correct, perhaps, and educationally instructive, but not conducive to placeness on the whole. There are a few exceptions, though: one on a house-adjacent patio, the other an early acquisition in the woods. 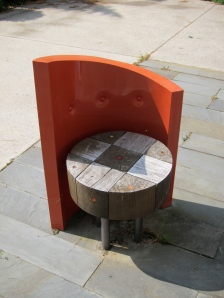 Who would expect a furniture maker to create a space rather than merely populate one? A suite of three seats – a banquette and two chairs in a triangular configuration – sit on a flagstone patio outside the original museum wing, nestled between the stone building facade, a 6’-high stone garden wall, a 4’-high terrace wall with stone stairs and a curvy deconstruction of a kiosk made from perforated metal, with signage and information about the sculpture park. The patio, a rectangle made from end-to-end narrow “planks” of flagstone, with an old round mill stone recessed at its center, is situated nicely as a sunken garden room with a sense of place as a given. But, empty or even with normal placed furnishings it would not have the balanced pairing that it does now with Jack Larimore’s quirky functional objects. They have a modern feel but are difficult to align to any particular modern period, harkening to the 1950s but with a more Postmodernity in their attitude and self-awareness. They are simple: tubular legs, enameled metal backs and square wooden blocks fashioned into a nice checkerboard for their seats, now weathered gray to match the color and texture of the surrounding stone. In their simple curves, small stature and asymmetrical flourishes they are animated. Their own checkerboard patterns along with the flagstone pattern they sit upon conjure a kind of through the looking glass, bizarro world, yet they are tactile and delightful objects, perhaps their objectness making them resemble chess pieces. Their backs are colorful, and, if you look carefully at the wooden seats, the knotholes are filled with resin colored from the same palette. Besides the seating being fun and design-y, it actually peoples the patio in the sense that the pieces, by themselves, project a strong presence in conjunction and collaboration with the space: the interaction between them and their setting is an elaborative and interactive one, and a self-sustaining one, too.

The woodland piece, down a long and not so distinct path on the same side of the property, seems unfinished and perfect the way it is. The sensibility is very different from the previous work, and yet is just as effective in its synchronicity with its site. Once a larger arrangement of elements (now decomposed) spread about a large tract, Winifred Lutz’s “A Reclamation Garden” has some fragments and ghosts still in evidence. One remaining built structure, a chimney form, stands like an ancient observatory, or a cooling tower between the earth and sky. About two stories tall, built of stone in a conical shape and seated in a dry creek bed which may not always be dry, it is placed in a way that not only makes it a signpost but puts it in a dialogue with a “real” ruin of an arched stone bridge that spans the once-active creek.

Which is older – the tower or bridge – is mystifyingly in question, since the artwork seems more primitive in its form and function, whatever that might have been. Its stone walls are pierced by openings reminiscent of a turret’s arrow slits, but once you enter through a slightly wider portal, you see the real use of the negative spaces – framing devices to focus the mind’s eye on surrounding nature. The top is a perfect circle, an oculus aimed up at the swaying treetops and passing clouds, kind of a telescope or periscope to the sky garden. The narrow slits at varying heights frame distinct views, possibly at particular points of the compass; they also let in light and air. 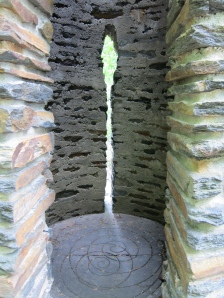 The floor, a solid circle with incised circular patterns, makes the place feel ritualistic. One can imagine that, when the creek is not dry, the water flows right through the tower, covering the floor patterns, or perhaps allowing visibility depending on the water’s depth, and rendering the creek a natural runnel through the structure. Whether it had a purpose at one time as a solar tracker makes no sense now in such a heavily wooded site, causing you to think that the flora has grown around it, giving it the age-appropriateness of a ruin. Bringing up questions of what makes a garden, this work creates a room within and a space without and interacts with nature in a three-dimensional way. As does a garden, it creates a sense of place.